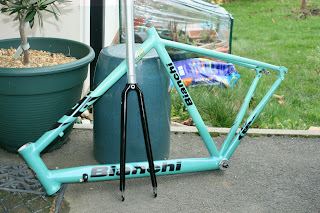 I figure I'll be needing a nice lightweight bike for the really steep climbs next year and I just happen to have the frame from an old Bianchi road bike laying around in the garage. It was a great bike when it was new and hopefully will, seven years on, be a decent bike once again. Its an aluminium frame and still seems in pretty good condition bar the odd scuff and scrape. Just got to decide what bits to build it up with.
Posted by David at 11:57 No comments:

...at least that is what it said on the box that I had delivered. I was a bit worried as I thought I had ordered a very small video camera that I could mount on my bike helmet to film my sufferfest of steep hill climbing. Turns out the package I received from Morgan Computers is a Somertek Micro Digital Camcorder; its just that nobody told the box designer. Turns out nobody taught him how to speak English properly either:


“Airframe stylish compact design to blend with the unique use of multi-function clip for your portable installation more convenient and can be caught in the backpack, hat, clothing or any other place you want the location of any implementation point of view the whole scene video/ monitor, but also easily applicable to a variety of occasions, recording/ monitoring”
The above is exactly what is printed on the top of the box. In fact the whole box is pretty amusing to read but I was more concerned if the £25 I had spent was a waste of money. I know that more expensive helmet cameras are available but I thought I would dip my toe in the water with a cheap option. Plus I'm tight. 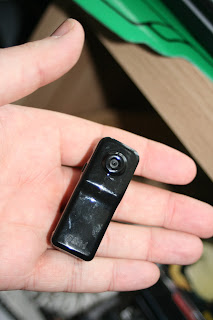 Well, it is certainly small, in fact it is too small for any of the buttons to be labelled but after stabbing away at them I can confirm it does record video and it does it pretty well. Numerous lights also flash, I've no idea why though as the same person who designed the box was obviously let loose on the manual. The microphone is quite sensitive (that'll be the voice recording “unique use of multi-function” coming to the fore). In fact the microphone is so sensitive that my grunting, gasping and spluttering up the steepest parts of my test ride were picked up quite clearly. I obviously have some work to do on building up my fitness if the video of my first ride out of the hundred up Porlock hill next March is not to be overshadowed by the sound of a fat man gasping for breath.
The helmet/ handle bar mounts have seemingly been designed with nothing cycling related in mind and attempting to fit them to my bike helmet required a generous length of boot lace. I would post up my first attempt at filming to demonstrate the quality of the camera but I only managed to film the two feet of road/ trail in front of my bike. Some fiddling around with the angle of the mount is clearly needed.
All in all though I'm quite chuffed with it. It is small, very light and appears to work. Downloading the video footage to my laptop is also easy. Just got to get some riding in now.
Posted by David at 20:42 No comments: