Wow, I really am falling behind with these updates. Sorry about that. Normal service will be resumed very soon. In fact I’m planning another couple of climbs in the near future so it had better be. Carlton Bank was my fourth climb of the day on the 1st of March and I was starting to feel a little ragged by the time I got there. The area around the climb was very busy. The nice winter weather had brought out a load of hill walkers and people interested in visiting the restaurant at the top of the hill. Parking was tight and I imagine that during the height of summer getting parked at all is a bit of a challenge. The descent was awful, truly awful. The top of the hill is surfaced with very badly pock marked tarmac and it was one of those rides where I was glad I kitted out the Uncle John with heavy wheels and fat tyres. I’ll pick reliability over speed any day of the week. After a bone shaking and filling loosening descent it was time to turn around, fire up the cameras and start to spin my way slowly to the top.

I struggled badly on this climb. I’d unbelievably covered almost 100 miles of driving up until that point in the day and I was just frankly knackered. My petrol station sports refuelling strategy wasn’t entirely working out (turns out Chicken on a Stick is the ideal example of empty calories) and my right knee also started grumbling as the road ramped up in steepness after the initial easy gradient. Everything slowed to a crawl as I progressed up the climb. This slow speed did have its advantages as my tired weaving about helped me to avoid the potholes that scar the top of the climb. 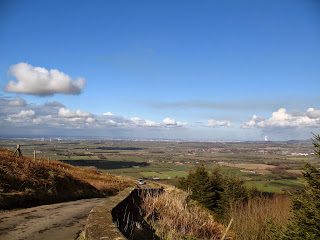 The view from the top of Carlton Bank

As I winched my way past the top of the climb I was congratulated for my efforts by a couple who had driven by me as I neared the top. They seemed very impressed by my riding as they put on their walking boots. All I could manage in return was some oxygen starved gibberish but their kind words were appreciated. After what felt like an epic day both in the car and on the bike it was back to my Travelhovel and some proper refuelling. I don’t usually touch alcohol on my trips away but the lure of a cold beer was too strong to resist. 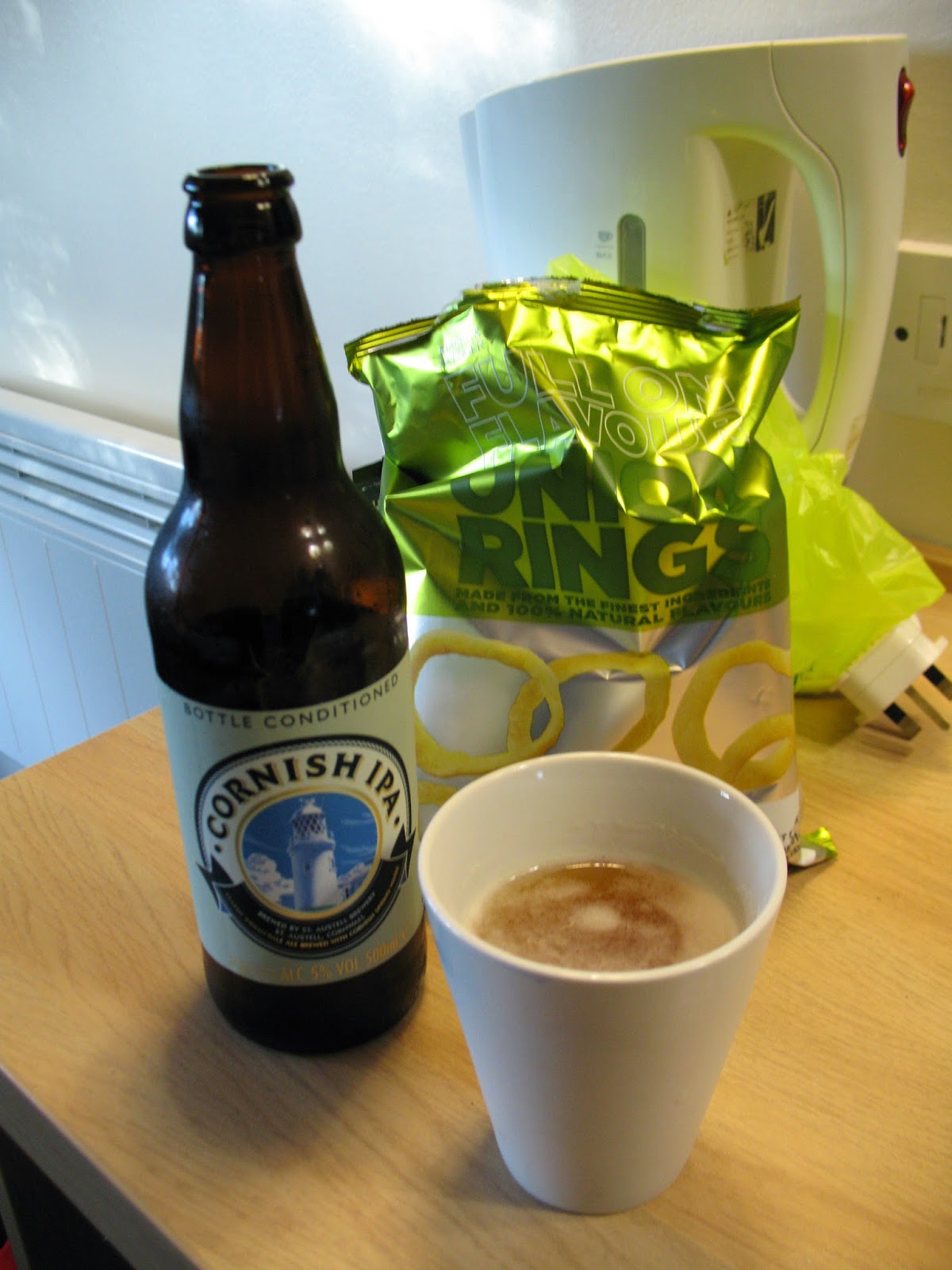 When it comes to recovery drinks I just don't do isotonic


My back and shoulders were aching by the end of the evening which was a sure sign I’d had to really wrestle the bike uphill. The next day I had intended to tick off two climbs but realising that my legs weren’t performing as I had hoped, and that I had a long drive home to deal with, I decided that I should only tackle one climb on the Sunday. It would be a longish one mind you; Tan Hill. More to follow.
Posted by David at 22:09 No comments:

Firstly I must apologise for the delay between my last blog post and this one. Since my last posting I have had a very positive change on the job front and my retraining and career change ambitions have paid off. I started a new job a couple of weeks ago and not only has it kept me off my bike as I settle into it but I’ve also been a bit too preoccupied to focus on editing videos. I’m more on top of the situation now and starting to restructure my training so hopefully I’ll be a bit more punctual in future.

My third climb of the day on the 1st March was up Boltby Bank. It wasn’t too far to drive from White Horse Bank so I was able to arrive at the top with my legs still feeling warm from my last ride. I think it is fair to call Boltby Bank a true pig of a climb. The mid section is pretty straight and just tracks right up the hill with a nasty little sting in its tail as it goes through a couple of tight bends before levelling off at the top.

I knew I was going to have a hard time as I drove to the top when I passed a pretty capable looking cyclist who was having a hard time. By the time I’d parked up, got my bike and cameras set up he still hadn’t appeared. In fact I was just about to set off down the hill when he arrived and asked if I had a map so he could check out a suitable route to White Horse Bank. I got the distinct impression he was keen to avoid too many significant hills after what he had just been through. When somebody who looks fitter than you is clearly having a hard time you just know it is not going to be a good day. Suffice to say it didn’t fill me with confidence.

The descent to the bottom was over quickly and without drama and the first section of the climb is actually pretty easy going. The gradient isn’t too severe to start with but after a couple of corners you are pitched onto an almost dead straight section of road that promises nothing but pain and low speed gear spinning. I really suffered on this nasty mid section of the climb; I just didn’t seem to be able to respond to the gradient and crawled up it. The final two bends are by far the steepest part of the climb but knowing that they were so close to the summit gave me the motivation to keep grinding out my low speed cadence and reach the end of the climb.


The top of Boltby Bank is marked by a cross roads which is also a national cycleway junction and there were plenty of cyclists in evidence. Some were riding mud splattered moutain bikes, others were on the latest light weight carbon road bikes and there was a nice convivial atmosphere. However, by the time I got back to my car none of that really concerned me as I was starving hungry. I had started off pretty early in the morning and had eaten only a minimal breakfast. It was time to break out the emergency rations which came in the shape of a truly hideous, but none the less compelling, snack food I had discovered at a motorway services. 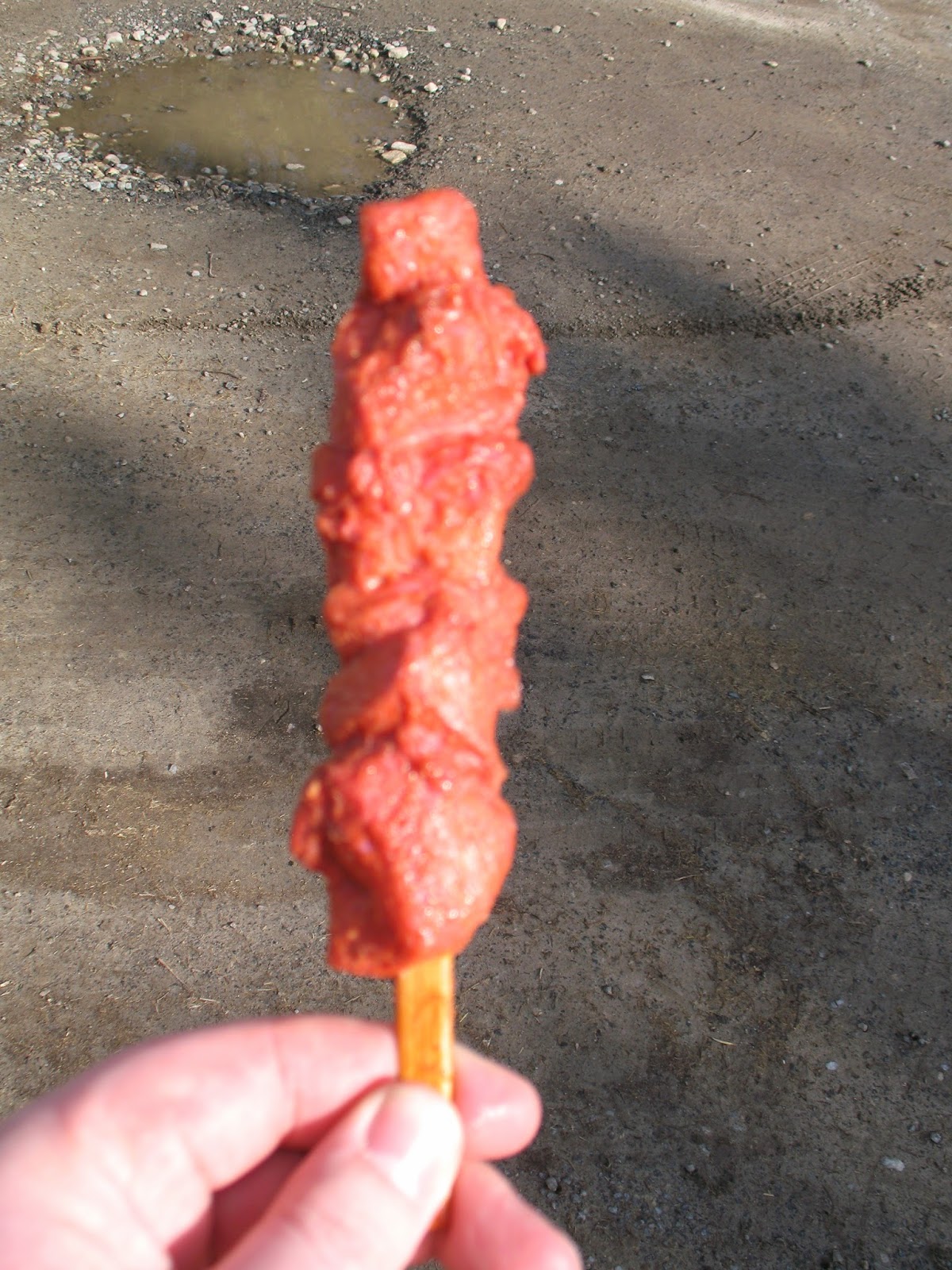 Mmmm, see the chicken flesh lollipop glisten in the sun


It is a well known fact that all of the most unusual and exciting food products are found at road side shops these days (does it show I drive a lot for a living?) and so when I saw something advertising itself as ‘Chicken on a Stick’ I felt a grim fascination to try it out. I figured it would at least be low in fat (that’s what the wrapper said) and high in some form of animal protein and so in my feeble mind would be the ideal fuel for my bike riding adventures.

All I can say is that you know there is no hope for mankind when you can buy what is effectively a chicken flesh lollipop masquerading as a low fat snack at a motorway services. It looked awful, didn’t taste great and was so shiny it confused my cameras auto focus. I naturally ate two before heading off towards the fourth and final climb of the day at Carlton Bank.
Posted by David at 21:12 No comments: