Dunkery Beacon - Going down from the top was more fun

After my ride up Porlock Hill where I was able to fill my helmet cams memory card up by taking too long I was both a bit quicker, and a bit better at saving my cameras capacity, going up to Dunkery Beacon. As a result I was able to save enough memory space to film the descent. I'm glad I did as you can make out more of the fantastic views. It also proves that I can move a bicycle along at more than 2 miles per hour.

What with stops to look at the scenary and my slow progress it probably took me a good 40 minutes to get up to the top (note to self: train more effectively). It took just under 6 minutes to get back to my car. I was actually quite knackered by the time I started the descent so I was taking my time and letting gravity do the hard work.

The only problem I faced on the descent was the slow puncture I picked up. Fortunately my front tyre didn't deflate until I reached my car; could have been nastier if it had chosen one of the faster sections to loose all of it's air. Gulp.
Posted by David at 20:51 No comments:

The ride up to the top of Dunkery Beacon was the second of the rides I undertook on the 18th March. I did it with Porlock Hill still hurting my legs and so got off to a slow and wobbly start.

Dunkery Beacon is a relentless climb; you start with no run up to it and are immediately faced with a 17% gradient. I'll be honest, as I rode past my car parked in a layby I was quite tempted to get in and drive to the top. Then I remembered that firstly it is an underpowered Fiat and so would probably struggle as much as I was. Secondly thats not really the point of all these climbs is it? So I decided sticking on my bike was the most honourable option.

Dunkery was full of surprises following the mauling I received at the hands of Porlock. For a start I wasn't alone. There were loads of fellow cyclists out and about, even somebody I know (hello James, I may well take you up on that offer for some company on the rides in Kent and London). The climb was also, to an extent, quite manageable. Ok, I'm not going to win a mountain stage in the Tour de France anytime soon but my 'stick the bike in bottom gear and grind up' approach seemed to work OK. It isn't the most elegant way to get to the top of Exmoor but then I doubt I'm the most elegant of cyclists.

The views on the way up Dunkery and from the top were also fantastic. I'm sure in the more typical Exmoor weather of low cloud and sideways rain I would feel differently but the scenary did help lessen the pain of the climb.

Finally there was the descent back down from the top. I was a bit knackered by the time I started heading down but unlike Porlock I was able to relax on this climb a bit more and build up a bit of speed.

When I get a chance I'll upload the descent video. I reckon it took me about 40 minutes to get to the top (I did stop to 'admire the view' a few times) and just over 5 minutes to get back down again.

Next ride will be on the 31st March when I take on Cheddar Gorge.
Posted by David at 20:13 No comments:

Well, here it is. I said it wasn't pretty; here are the edited highlights/ lowlights of the first ride in the challenge. Enjoy

The footage from Dunkery Beacon is still to be edited and it will be a few days before I'm ready to post it.
Posted by David at 23:03 No comments:

This is just a quick update before I get down to looking through the footage shot on today's two rides.

First hill up was Porlock Hill. Lets just say at this point that it wasn't pretty.

I thought I would start with one of the big hitters in the South West mainly to see just how off target I was in my preparations. Turns out very off. I made it up past the first vicious hairpin OK and them just sort of ground to a halt halfway between it and the second hairpin. Some swearing and a bit of walking then followed as it was obvious the gradient meant that getting going again was going to be very difficult and dicey on such a steep busy road. Normally walking up a hill is easy. With Porlock it wasn't (imagine trying to push your bike up the side of a house) and so I was soon back on the bike and slowly winching my way up to the top. A few more stops were needed en route though as I really struggled to get into a decent rhythm. Stop once on a climb like Porlock and you're doomed.
Within a couple of hundred meters to the top I realised I had taken a bit too long to get to there when my helmet camera signalled to me that the memory card was full and was about to stop recording with an ominous beeping. More swearing followed at this point as I realised that once at the top I would have only my low resolution mobile phone camera to prove I had made it.

Overall I'm not happy with my performance on Porlock Hill at all. I knew it was going to be tough but it was almost comically so. 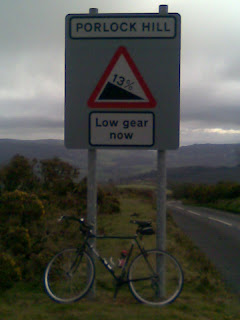 A brief pause before what must be one of Britains scariest road descents; it gets steeper. And greasier, and twistier.

The decent back into Porlock was as scary as the ascent was painful. The roads were greasy and on a couple of occasions the escape roads on the outside of the hairpins started looking inviting. My wheel rims were getting hotter with all of the braking I was doing  as the descent wore on and I had to brake carefully to avoid blowing a tyre.

I have a feeling I'll be back to Porlock at some point in the future with a point to prove. The hill will probably still win but It just didn't go at all well today and I want to at least improve on my performance (and maybe take the less scary toll road back down).


The second hill of the day was the one up to the top of Dunkery Beacon.

This has a lesser gradient than Porlock but is still a savage ascent. Gallingly I could only find somewhere to park halfway up and so had to ride to the bottom before starting the climb proper. There was a point when I pedalled past my car that I was tempted to get back in it.
Where I was the only cyclist on Porlock I had plenty of company on Dunkery as Sunday is obviously the day when cyclists choose to hurt themselves on Exmoor. It was comforting to see a few other cyclists struggling with the relentless 13 – 17% gradient. I saw a range of coping mechanisms on display from walking to zigzagging all over the road and my own personal favourite; stopping to take in the views. I would call them breathtaking views but I didn't have any breath left by the time I made the halfway point. I even met somebody I know during one of these impromptu rest stops which was quite a surprise.
The story of Dunkery is a bit more satisfying than Porlock as despite the sufferfest on the way up I felt I was a bit more comfortable with the gradient. My main problem was that I'm not used to riding that sort of gradient for that sort of distance. My training rides normally take in hills as steep as 17% but they never go on for as long and the hills I'm used to riding tend to have a greater variation along their length in terms of gradient. I'm clearly going to have to start building some repetitions of the hardest sections into my training.
I don't normally try to tackle a steep climb with a bruising ascent of Porlock Hill already in my legs either to be fair so I can at least say I made it to the top of two Exmoor climbs. Eventually.
The ride back down to the car from the top of Dunkery Beacon was more fun than Porlock and the view from the top was pretty special as well so it was a much better experience all round.
When I've had time to look through the footage from today I'll stick the videos up. This will hopefully be by the end of the week. There is much swearing and looking at the scenery to be edited out...
Posted by David at 17:20 No comments:

One week to go

Well, the 18th March is nearly upon us. As I've spent the last few months spinning a low gear up long ascents I've decided that for the final week of preparation I should do a few rides on my trusty Singular Swift. It only has nine gears (only eight of which actually work due to some idiot, me, not setting up them up properly) and fat draggy tyres so I reckon it will be ideal for some last minute training with the aim of putting some more kick into the way I tackle the climbs. When I ran it as a single speed I found that it helped put some speed into my climbing so hopefully in the final week I can add a little extra power to my climbing. 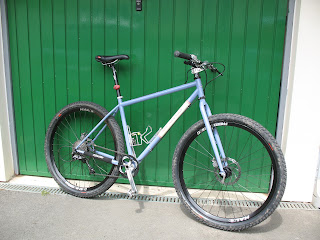 Riding this up steep hills makes my heart rate monitor beep like some form of self destruct warning so it must be doing me some good
My Bianchi is still a pile of bits in the garage at the moment so my tough but versatile Surly Cross Check will be pressed into service for the first few climbs. I'll be removing the mudguards over the course of the next week, fitting lighter road wheels and tyres and, er, giving it a clean. I might check the gears are running smoothly but I suspect it will be stuck in bottom for most of Porlock hill and Dunkery so as long as I can engage the granny ring and largest sprocket I'll be happy. Not that I have low expecations of my climbing prowess or anything...
Posted by David at 16:58 No comments:

The Elastic Has Snapped the Action Movie...

...or badly filmed and poorly edited trailer. I think I have made the latter but I'm still strangely proud of it.

Hopefully the rides will be accompanied by better quality films than this but I couldn't resist making a trailer, if only just to see if I could get the hang of filming before I start the rides. Clearly I, ahem, haven't...

I'm not entirely sure this will inspire people to sponsor me but once you start down this path you have to keep going. Besides, I've been a bit under the weather and off the bike this weekend with too much time on my hands.
Posted by David at 21:03 No comments: