White Horse Bank was the second climb I tackled on the 1st March. After painfully winching myself up Rosedale Chimney I had a 40 odd minute drive to the climb at White Horse Bank. Just long enough for me to cool down and for the sun to burn off any lingering traces of frost.

The climb at White Horse Bank makes for a fairly intense descent. It is tight and narrow with lots of sharp bends and, in places,  a pretty rough road surface. I parked about a third of the way down the climb at a big car park where a lot of dog walkers and family groups were parking up before going for a stroll through what seems to be a very popular forest park. Be warned, on a nice sunny day the road up White Horse Bank can get very busy which only highlights how tight it is in places.

The car park is directly underneath the so-called white horse which was created by a local man keen for Yorkshire to have a White Horse of its own to rival those of the South West. The white horse in question is crap. Thankfully it is below the end of a gliding clubs runway and on a sunny day you are treated every few minutes to a plane taking off at full throttle as it tows a glider into the air. This is far more impressive than the chalk decapitated pig/ dishevelled dog/ white horse but I wasn’t able to get my camera out quickly enough to photograph a plane. Sadly the white horse was going nowhere and I felt duty bound to take a photo. 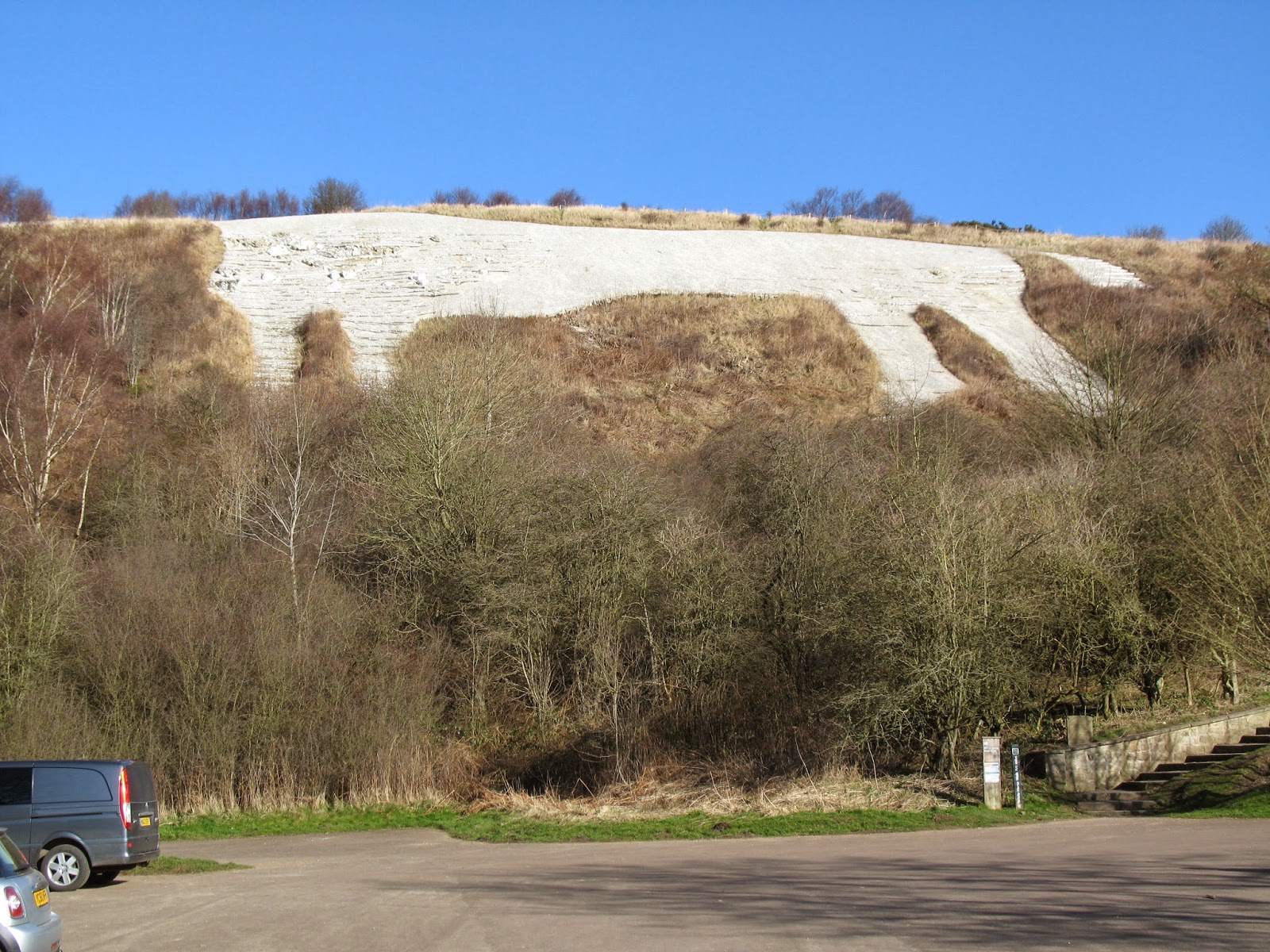 Breathtaking in it's crapness

The descent down to the start of the climb was quite bumpy and on starting my climb back up I seemed to be lacking any form of rhythm.  The lower part of White Horse Bank isn’t too steep but I just couldn’t get the pedals turning with any form of conviction. It was probably a combination of struggling on Rosedale Chimney and then having to drive for 40 minutes. Whatever it was it took me until about halfway up before I finally settled into a riding pace that I was happy with. It was sadly a very slow one but it would have to do.

The hill itself is actually quite pleasant; in between the increasingly steep corners the gradient backs off a bit and, for an on form cyclist, these straighter sections represent a chance to build momentum for the next steep uphill bend. I didn’t really feel comfortable until near the top and by then I was on the steepest part and by default going slowly. Once finally at the top I had a bit of a cruise along on the flat road that runs alongside the gliding club before turning back to the car and heading off to Boltby Bank which wasn’t far away.

Fear and Loathing on Rosedale Chimney

After driving up the day before and spending the night in a Travelhovel I got up early, scraped the ice from the windscreen of my car and set out across Yorkshire to get to Rosedale Abbey. It had always been my plan to get to the ‘Chimney’ first and get the toughest climb out of the way while I was still fresh and before the road got too busy. I managed to get to Rosedale for just after 8am. Driving up and down  the climb to check it out I felt quite chuffed with myself when I saw that the road was indeed nice and empty. I felt slightly less chuffed when it became clear that there was ice and frost on certain parts of the climb. 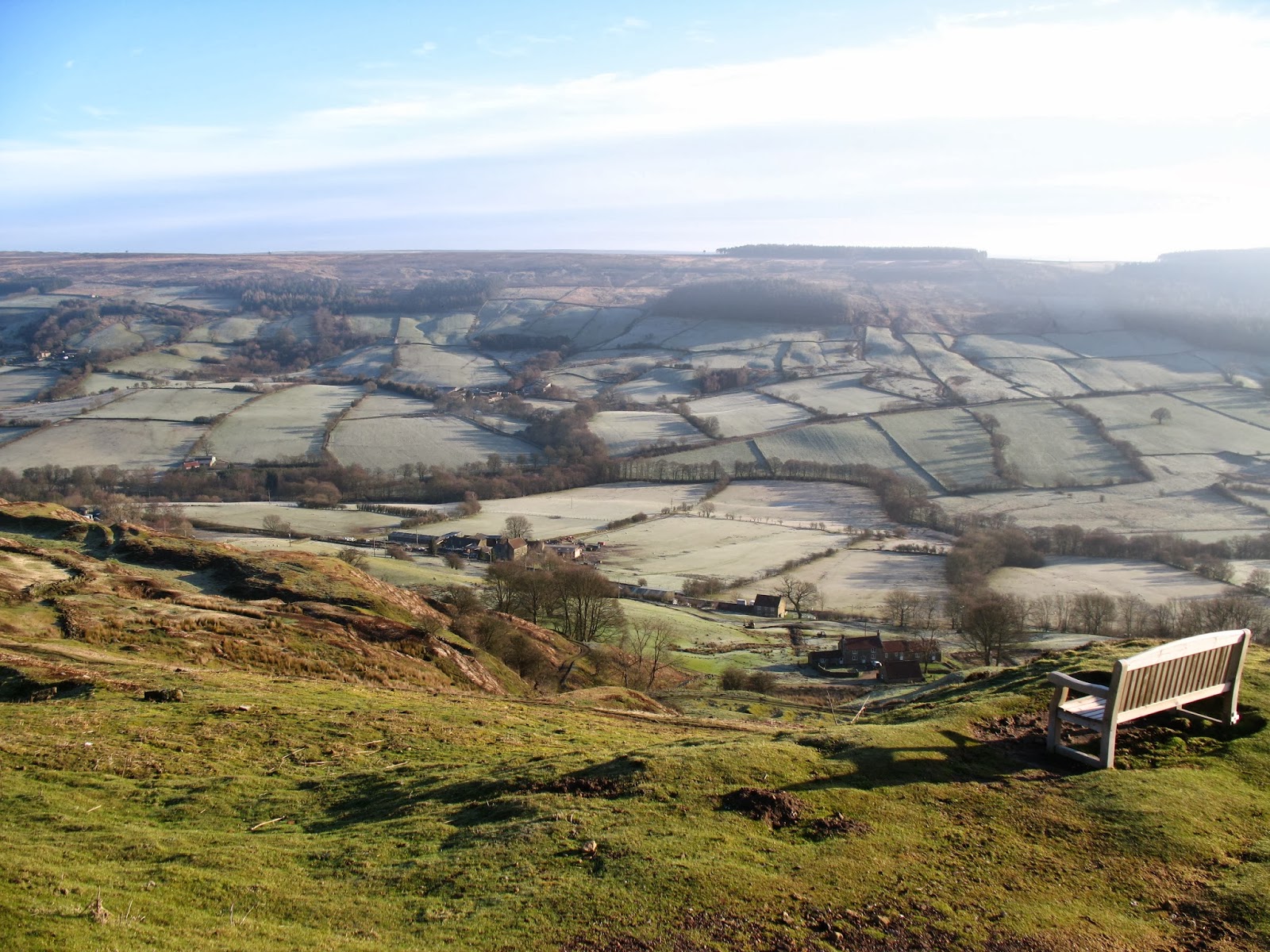 The temperate the night before had been into the minus’s and I had gotten to the climb so early that it hadn’t had a chance to properly thaw. The slippery stuff was only present in randomly distributed patches but after one or two slippery moments my bottle went on the way down; Rosedale Chimney is too steep a climb to be practicing my bike handling skills. Mind you it also proved to be a bit steep to walk on when covered in bits of ice and wearing stiff soled cycling shoes. I stopped at one point to see just how much traction my tyres would have on the frosty sections and it proved to be worryingly little. The descent to the start was tense to say the least. Its strange really as the sun was out and it was shaping up to be a beautiful day but in the patches of shade where the heat of the sun hadn’t had a chance to burn off the frost it was damn scary. 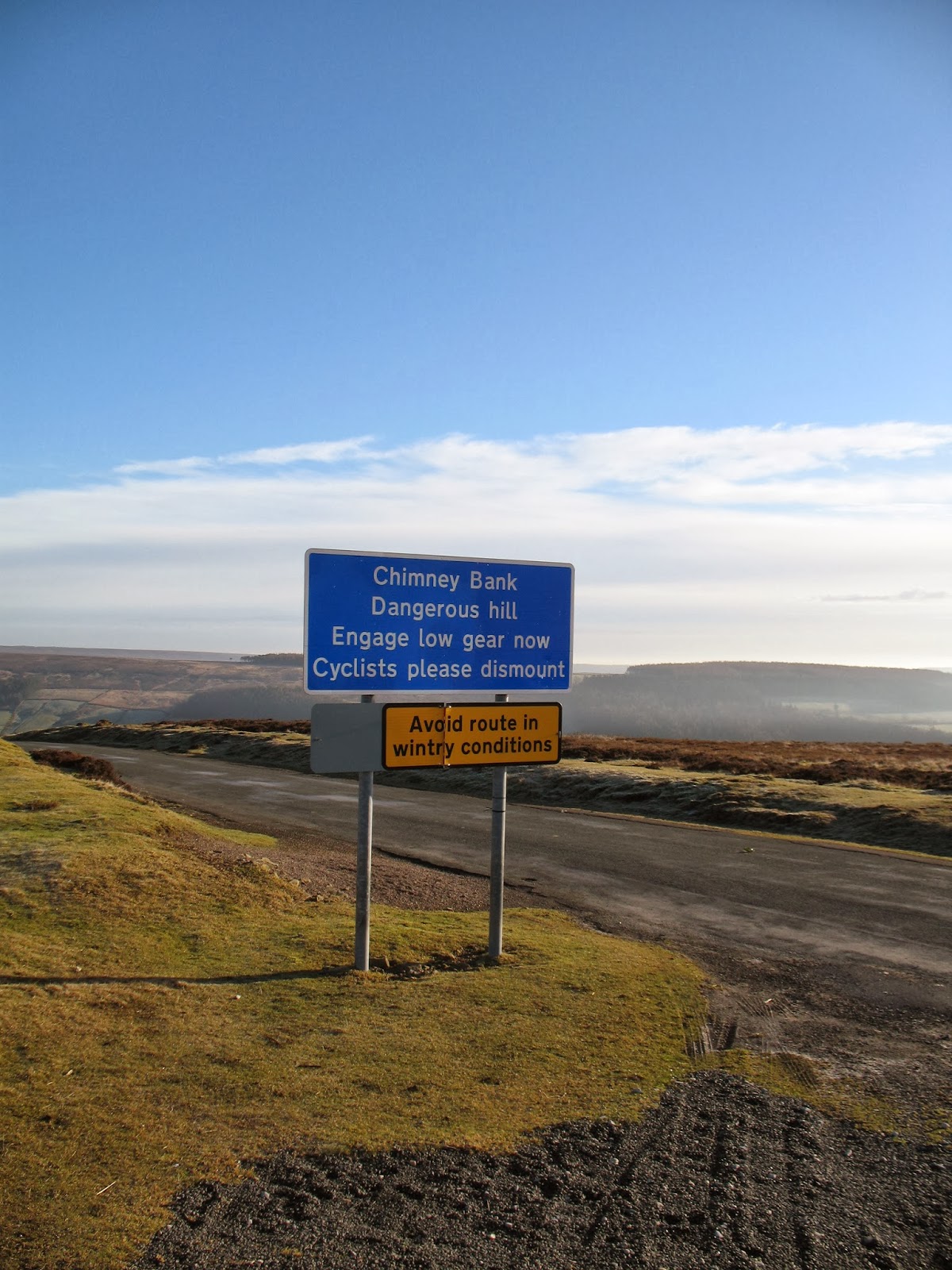 Cyclists dismount? Yeah right...oh hang on, is that ice?!?

Rosedale Chimney is a climb that starts steep and doesn’t ease off. As you reach the White Horse Farm Inn about a third of the way up it dawns on you that this is a climb that doesn’t give you any chance to ease yourself into the effort of getting up it. There is a bit of a slackening off in the gradient as you approach the cattle grid about a third of a way up but this is basically one nasty bit of road from start to finish. 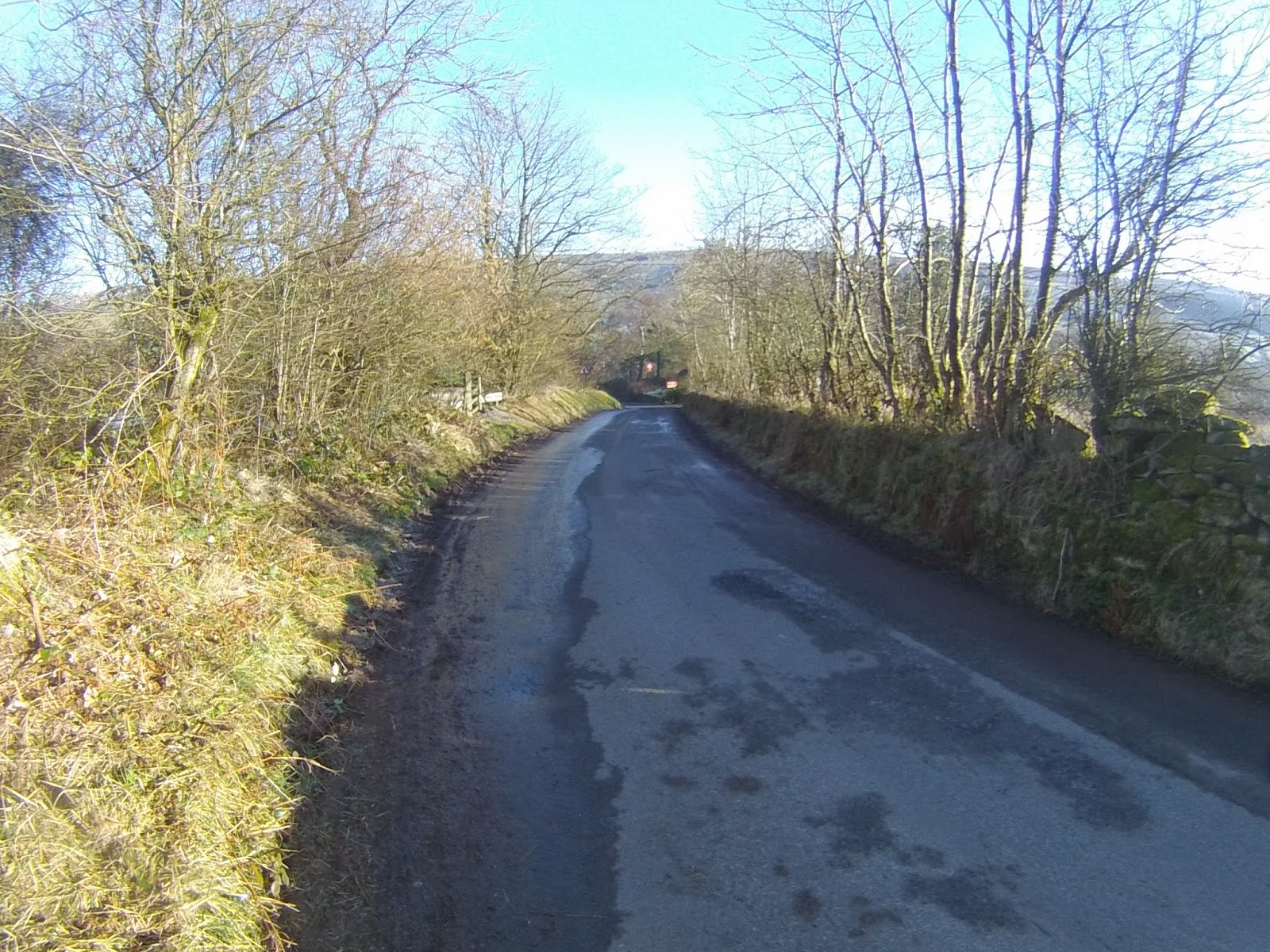 That ain't water but it's more slippery cousin

The two hairpins halfway up Rosedale Chimney aren’t actually the worst part of the climb. It may be just me in fact I quite like hairpin bends; they give you a clear visual point of reference to aim at and an opportunity to alter your pace. Yes, the Rosedale Chimney bends are steep but the short straightish section of road that follows them is what really does the damage. After tackling the lower section of slope that passes the White Horse Farm Inn and then pushing on past the two hairpins you are then faced with a simply nasty section of road that just seems to continue the worst gradients of the hairpins but with none of their charm. By the time you reach it you are guaranteed to be on the limit and quite frankly I struggled badly on this little bit of the climb. Having to dodge the patches of shade which where helping the frost to persist only added to the joy of the whole painful experience.

It will come to no surprise to anyone who reads this blog on a semi regular basis that I was probably the slowest moving person in North Yorkshire by the time I reached the upper section of Rosedale Chimney. The gradient does vary a little as you get closer to the top but not enough for you to ease up and have a chance to recover. It was a blessed relief to finally reach the top and be able to stick the bike back in the car. Unfortunately my work for the day was far from over and I had three other climbs to tick off the list before the day was out. Next stop was White Horse Bank.
Posted by David at 14:31 No comments: