The Karate Monkey Must Die

Yep, its true. The time has come for me to dismantle my Karate Monkey. It has been a great bike and very adaptable. It has had every set up option under the sun thrown at it since 2010 going from a skinny tyre road bike with flat bars and V brakes to a drop handle bar balloon tyre shod monstercross bike before finally ending up as a heavy duty hybrid/ winter training bike complete with riser bars and bar ends (oh the horror). You can thank/ blame the late great Sheldon Brown for my endless experimenting with the bike as I was inspired by an early Karate Monkey he once built up with two sets of handle bars, brakes and gears (hub and derailleur) just because he could and the frame would allow it. 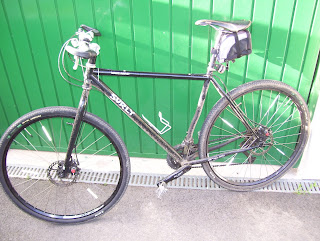 
It has been a fun bike but I need to move on and experiment with a new, lighter and more responsive frame. I've gotten to the point where lugging the heavy old girl up and down the local hills is no longer offering me a training opportunity and, if I'm being honest I want to try something newer and shiny just for a change. If I'm being honest getting back into the garage and swearing at tools again will also have a motivational aspect to it as the pressure of working for myself has taken some of the joy out of cycling.


To this end I've bought a cut price frame from those Northern purveyors of cheapness Planet X; a disc brake compatible road bike frame that will hopefully build up into a versatile all weather machine that can stand in for the Uncle John on some of the harsher hill climbs ahead (the disc brakes will certainly help on some of the climbs). Its a frame with a bad reputation for poor manufacturing tolerances (guesses for the model on the back of a fiver to the usual address) and I may need some help from my LBS in getting it ship shape but that just adds to the fun. To find out what manner of freak machine I build next you'll have to stay tuned as it is still in its box ( I really have been that busy with work recently). The only clue I'll give away is that it will be geared for the steep stuff, probably not too pretty to look at (like most of my bikes) and generally a bit of a mongrel. 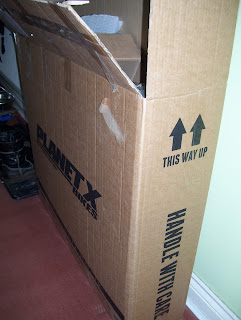 Wow, has it been that long?

It seems like another lifetime ago when I last posted to this blog. Sorry about that.


I'd like to say I'm back with a bang but I think I would fall a bit short of the dynamism that would be needed for that. Its nearly a year since I was last on the bike bagging epic road climbs. Setting up my own business and then running said business has taken up pretty all of my time and huge amounts of money, pretty much to the exclusion of everything else. One of my customers recently commented that running my own business must be great as I can decide when to work. Er...yeah, I can but if I want to eat I kind of have to work when my customers want me to, plus I no longer get paid holidays. I have been getting out on my bike but the need to generate an income off my own back has had to take priority. In many ways it still does today but I'm aware that I still have 21 climbs to complete and I intend to make a serious dent on them over the coming months.

My new job is a nice active one and involves lots of time spent climbing up and down ladders, carrying heavy bits of kit around and generally not being sat behind a desk staring at a laptop all day. As a result I don't seem to have lost any power over the last few months although my fitness levels are behind where I want them to be at this time of year. I seem to have lost a bit of weight as well. Now don't go getting excited, I'm not rocking a Chris Froome look but by my standards I am marginally more efficient with regard to power to weight ratio and on recent training rides I've been mashing my way up the North Devon hills in a decent gear and not feeling too knackered at the top so there is hope for the future.

Most of my training miles have been done on my faithful Surly Karate Monkey which is probably the most unlikely training bike you can imagine. That said, hauling its weight up and over the local hills has resulted in my going up my regular training inclines with a fair bit of extra power and in a much higher gear and being able to go off piste and leave the tarmac behind when I feel like it has been a fun addition to my rides. I do however need to put some longer rides in to ensure I don't get to the top of my local climbs completely out of breath and ready to collapse.

There is going to be a further blog update in the next week or so but rest assured, the remaining 21 climbs are in my sights once again and I'm intending to spend a bit of time at the start of October getting the total remaining to below 20. After a spring and summer trundling around North Devon in a battered little white van I'm more keyed up than ever to get back out into the wilds and up close and personal to some steep tarmac.

As a farcically over sized Austrian once said; I'll be back.
Posted by David at 21:39 No comments: