I took the Swift out for a ride along the Tarka Trail for a flattish ride today. I wanted to avoid the traffic and also to take in some of the autumn colours before they get turned to a muddy brown by the onset of winter. 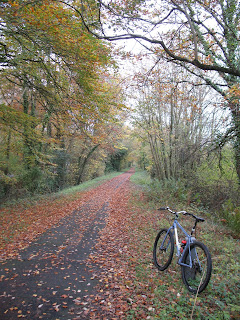 As ever my trusty Singular Swift was fast and comfortable on the sometimes broken surfaces. It made a change to ride on the flat for once. I didn't get a single beep out of my HRM although it was still a good training ride. Everybody I encountered on the trail was cheerful which made a change. Must have been the perfect weather for this time of year bringing out the best in people.
Posted by David at 15:09 No comments:

I was cycling on the Tarka Trail with some friends about six months ago when our leisurely ride was interrupted when some pillock driving a car with a camera mast mounted on the roof came towards us on what is a pretty narrow bit of the track.  A few choice comments were made by all of us on the trail as the guy didn't give us much space or seem too apologetic for forcing most of us on the trail at that time into the bushes.

This week the resultant photos of the Tarka Trail have finally been released on Google Streetview and I'm pleased to see Google have captured my best side; the back of my head! 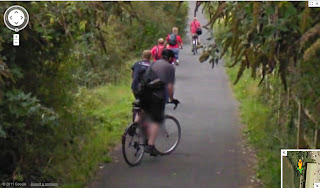 I suspect any views of my front would have included a well known hand gesture used to show displeasure. This is probably why I only appear as I ride away from the camera car. Oh well, its fame of sorts...
Posted by David at 14:33 No comments:

That's the sound of my heart about to explode. At least is is according to my cheap heart rate monitor. Every time a hill sends my heart rate up to 185bpm the damn thing decides thats's it, no more work and starts beeping at me like a mad thing. Its very irritating and rather off putting as I usually have the more pressing issues of a steep gradient and gravity to deal with once the noise starts. The beeping is also quite loud so fairly embarrassing:

"Don't worry dear it's just the noise of that fat man on the bike about to explode".

I clearly need to work on my aerobic levels. I'm carrying too much weight, both on me and on the bike, but I hope by the end of February to have shed a bit of weight and upped my power.


December isn't far away and is a time of year I normally spend off the bike. I've got an old turbo trainer to set up in the garage and hopefully I'll get some decent walks in as well. 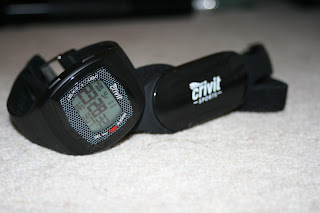 Anyway, about the heart rate monitor. Its one of Lidl's finest and for under £20 it isn't actually too bad. It doesn't just tell me through the medium of urgent beeping that I am unfit; it also records my max, average and minimum heart rate on any ride. The chest strap is quite comfy and it is possible to replace the battery in the chest unit yourself unlike more expensive brands. I'm averaging about 140 – 145 bpm on a hilly ride which I don't think is too bad. Anyway, on with the training. Actually on with the garage clearance as I need to shift a load of crap out of the garage before I can set up my turbo trainer in there. That should work up a sweat.
Posted by David at 19:53 No comments:

Time to get going on this project I guess...

Right, its been a while since I registered this blog and did my first posting, now its time to get it under way.
First things first, I have a start date for my marathon hill climbing extravaganza, and a timescale.


I'm doing this series of hill climbs in memory of my late mother and so it seems only fitting that I start off this whole thing next year in March. Her 67th birthday would have been on the 17th March. Because my dad and I will want to do a few things to remember my mum on her birthday I'll be kicking things off on the 18th. Its a Sunday and I should have enough time to tackle Porlock Hill and Dunkerry beacon. Thats my target. In terms of overall timescale I'm intending to tackle each region in turn. That is going to require a lot of travelling and as I have to work full time I'm of the mindset that taking a year and a half to tackle all of the climbs is a fair enough time scale to work to.
As far as the charity I'll be supporting goes there will be two. The first is Cyclists FightingCancer. Its a damn good cause and I guess in my own small way I am a cyclist fighting cancer. The charity does a lot of work to help children and young people (and their families) get cycling, usually by providing bikes. I remember the joy of my first bike and it will be good to help others share that feeling. The second will be CancerResearch UK as one thing seems clear to me; there is still a lot more work to be done in the clinical fight against cancer. All money received will be split evenly between the two, seems the fairest way to do it.

Ok, thats the semi official stuff out of the way. After a summer of not enough cycling I'm only just starting to get some focussed mileage in. My rides are focussed mainly on short rides with lots of hills at the moment. I'm a porky bugger who has consumed too much beer over the last six months and I figure I need to slowly build up to the sort of rides that will let me really improve my aerobic fitness. To try and get a measure of what my fitness is actually like I've undertaken a three day blood pressure monitoring exercise under the watchful eye of my GP and it is surprisingly low. That's the good news. The bad news is that I've started riding with a heart rate monitor (HRM) and I get alarmingly high up my threshold very quickly once the roads start getting steep. I can get up them quickly (god bless triple chainsets) but it is at the risk of exploding.

I got my HRM from Lidl (home of the cheap deal) and I've been very impressed with it so far. Its solid and gives out information like my average heart rate as well as my highest and lowest on any given training ride. If the readings weren't so scary I'd be quite chuffed with it...


The bike I'll be training on over the winter is my trusty Surly Cross Check. Its tough, versatile and has very low gears for the steep bits. I also have very powerful V brakes on it for the more enjoyable steep bits. I'm still trying to decide what bike to take on the climbs with. For the first few the Surly will probably be pressed into service as I have some road wheels in the garage going spare. The Cross Check is a bike I built specifically for hilly terrain so you never know it may make it all the way round the hundred climbs. For when the winter weather really starts to bite I will have the choice of either a 9 speed mountain bike (Singular Swift) or my drop handle bar Karate Monkey. I'm in the process of getting my Karate Monkey ready for any icy weather by fitting studded ice tyres to it. Hopefully won't need them but they were going cheap in a sale and look really cool.
Posted by David at 20:00 No comments: