Just over a year ago I attempted to ride Jiggers Bank on the way back from a meeting in the Midlands. Because of extensive road works that had only just started on the day I tried to ride the climb (timing never has been one of my strong points) I was unable to ride the ‘official’ 100 climbs route. The road out of the gorge has suffered from a few land slips in recent years and a lot of work was needed to stabilise the banks that loom over the road on the upper part of the hill out of Ironbridge. 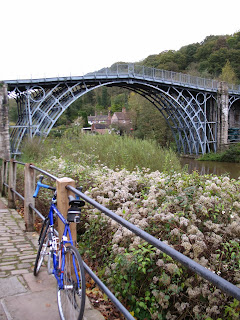 Regulation photo of bike in front of local landmark


A trip to a trade show in early November gave me the opportunity to have another crack at Jiggers Bank and actually ride the whole hill. Last time around I had to take the alternative and steeper route out of Ironbridge and whilst it was a good challenge it did annoy me that I hadn’t taken the proper route.

Exactly a year to the day ( I didn’t plan it that way) after I first attempted to ride the road out of Ironbridge I found myself back in the town and trying to warm up after a 4 hour drive up in the car. After a brief spin around a car park I thought it was better to just get on with things and start riding uphill. I knew that the lower part of the climb has a gentle gradient and was able to make decent progress even with cold legs. I got stopped at the traffic lights a third of the way up the hill and once underway found myself riding the section of the climb I wasn’t able to last year. The gradient isn’t too bad and the road signs suggest the average gradient is around 8%. I got a bit slower towards the top, mainly because I wanted to get a good look at the work that had been done to stabilise the banks, but generally found the ride quite easy. It is only ranked as a 3/10 and is more a pleasant uphill meander than a serious hill climb. I had toyed with the idea of taking my single speed up the hill and would have been forced into riding faster if I did. If I’m ever in the area again I may well do just that, it isn’t a hill that requires gears.


After reaching the top it was time for a fast descent back into Ironbridge, a place that looks very pretty but always seems very quiet whenever I’ve been there. After spinning along the river for a closer look it was back into the car and off to a my overnight stop before a trade show the following day, job done at last.
End of the Road (well for 2013)

After suffering a collapse in form in September it has been hard to find the energy and time to tackle the remaining climbs in 2013. An over ambitious schedule for tackling the Scottish climbs combined with the stress and activity that surrounds being made redundant meant that my energy levels took a serious dive and it wasn’t until October that I was starting to ride the bike with anything resembling good form. Job hunting and trying to set up my own business have also taken up a lot of my time and, frustratingly, just as I’ve started riding well the time left to complete everything in 2013 or even just get a couple more rides completed has ebbed away.
Don’t worry, I’m not through with the 100 climbs. It just seems that, for me at least, the best time to make any progress tackling them is at the start of the year. I’m back to riding well again and so in late January I’ll be back on the road ticking off the remaining climbs. I’ll be back.