I Want Your Money

Well actually I want you to give your money to two very worthy causes.

In December 2010 I lost my mum to breast cancer. It was very advanced when it was diagnosed and neither she or the family had time to come to terms with it before she died. After spending some time grieving I've decided it is time to do something positive in her memory and hopefully raise some cash for charity along the way.

The challenge is quite simple; after reading the book 100 Greatest Cycling Climbs I have decided to take on every single climb in the book. Some are steep, some are short, some are plain epic and they are dotted throughout the UK so most of them are nowhere near where I live. Every single climb has been given a rating out of ten by the author Simon Warren with ten  being the most severe. There is even an eleven, which is very 'Spinal Tap', up in the Cairngorms which I intend to keep til last; mainly because it looks scary. I'm not aware of anybody else taking on all of the climbs in the book and documenting their efforts so my ride/s could be a first.

Because of the varied location of the climbs and work commitments I will be taking a bit of time over getting to them all. I hope to have completed them by the summer of 2013. I'm starting in March with the climbs in the South West near to where I live. My mum had a love of the wilder parts of the UK where some of the climbs are to be found so in many ways it is a quite fitting challenge, besides cycling is about the only thing I know how to do. Sadly my recent training rides have shown me it isn't something I do with a great deal of speed. Lets just say I have a build that is optimised for gravity... 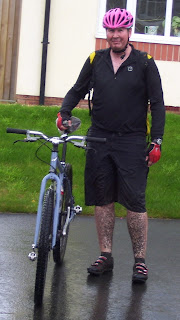 A lot of pies and beer have been sacrificed for this mighty figure of a man
The charities I've chosen hopefully speak for themselves. Cancer Research UK work hard to try and make sure people won't have to go through what my mum did. They concentrate on making sure that cures and effective treatments for a range of cancers can be found. That sort of effort always deserves support.

I'm also riding in support of Cyclists Fighting Cancer. They help families with children affected by cancer put some joy and fun back into their lives by providing free bikes and equipment. Riding my bike has helped me a fair bit over the last few years, I reckon its time to pass that on.

I have a Virgin give me all of your money type website up and running called Cycling Uphill Slowly so feel free to donate if you feel inspired to do so. You might just feel sorry for the fat idiot trying to take on some of Britains hardest climbs, whatever, all money is good.

I start on March 18th this year, a day after what would have been my mums 67th birthday. To get things started with a bang two of the toughest climbs in the South West will be the target for the day: Porlock hill and the road to Dunkery Beacon. A timetable of climbs to be tackled is being put together and I'll post it on here as soon as it is ready.

Each ride will be the subject of a video, photos and the like. This is partly to show I'm taking on the climbs and partly to inspire anybody who fancies having their own go at them.

Right, I reckon thats enough from me for now. More updates to follow.
Posted by David at 21:41 2 comments: