Ahh, Shibden Wall, a legendary climb amongst British Cyclists. I have to be honest, I was actually looking forward to riding this cobbled suffer fest. I knew it would be a rough ride and I'd reach the top in pain but its one of the climbs in the 100 Climbs little black book of pain that has always stood out for me.

I woke up at dawn on the 22nd June to find that my left knee had miraculously stopped hurting and was actually bending properly again. Bouyed up by this positive development (and after falling asleep the night before with my knee feeling like it was broken I could only be positive) I piled into the car and set off for Shibden Wall. I reached Lee Lane (the official street name of Shidben Wall) by about 8am. If you're trying to find Lee Lane and struggling to get your sat nav to recognise it I recommend heading for the Shibden Mill Inn which will bring you to the bottom of Lee Lane.

I parked at the bottom as I didn't want to subject my over worked Fiat to the horrors of the cobbles which meant I was riding the climb blind. This did give me a few problems with pacing as it meant I didn't know how long the steep, cobble free, section at the base of the climb was. I was feeling relatively fresh and probably spent a bit too much energy on this lower section of the climb. As I rounded the final bend on the smooth(ish) surface I felt a little bit excited as the cobbles came into view. The other cobbled climbs in the book are tough but, in the case of Constitution Hill and Michealgate the cobbles are fairly ordered and in good condition. The gradient and bouncing as you ride over the surfaces of both make them a tough ride but they are rather civilised for cobbled climbs. Swiss Hill is a challenge because the cobbles are more uneven and there are a few rutted sections but it is a relatively short climb and the variations in gradient mean it isn't as tough as Shibden Wall. 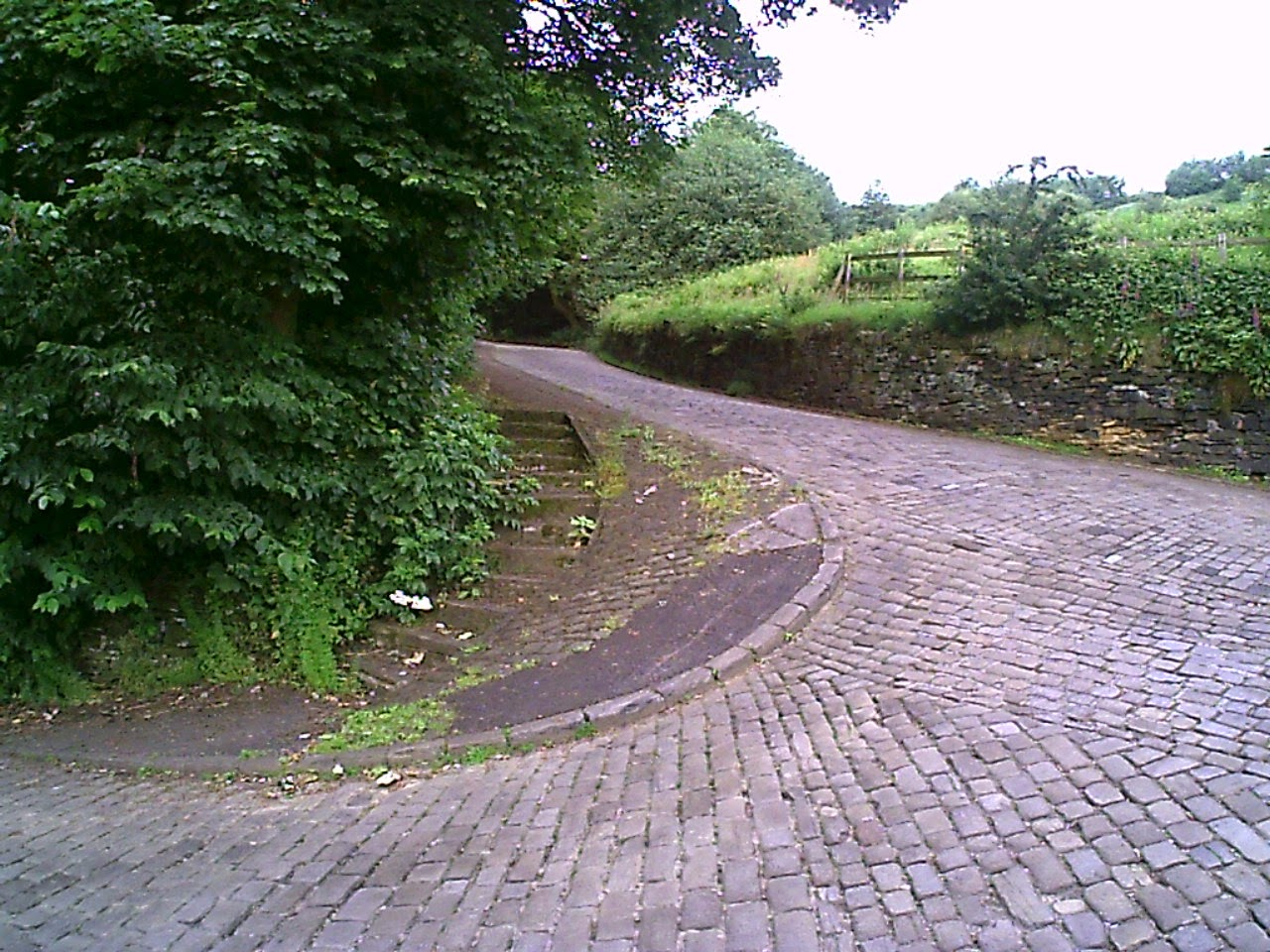 Shibden Wall is something else. You reach the cobbles with a steep start already making your legs burn and then you hit some horribly uneven cobbles on a very steep section of road. Its basically a daft piece of road and I couldn't help but laugh as the first few metres rolled under my wheels. Just as the cobbles start to give you blurred vision what must be the work hairpin bend in the UK bounces its way into view; its horrendously steep with some really uneven cobbles and the only way to ride it is to take the widest line possible. Not having had the chance to drive the hill before riding it I was hoping that the hairpin from hell might indicate that things were about to get better. Sadly not. The cobbles got worse, the gaps between them wider and the steep stuff just kept appearing. In fact the section that follows is probably the hardest part of the climb as the gradient stays steep and the quality of the cobbles in some areas is appalling. What I could believe was how many houses there are on the hill. I can only assume the local residents have gotten used to the blurred vision they must have from having to drive up and down the cobbles every day. Thankfully the road was quiet as I tackled it relatively early on a Sunday morning; my slow speed weaving could have caused problems with approaching traffic otherwise.


Finally reaching the top brought a brief moment of joy before the realisation set in that I would have to ride back down the climb to get to my car. With visions of me bouncing out of control at high speed I did the only sensible thing and took to the pavement for the first part of the climb. This ran out about halfway down the climb and I was forced onto the cobbles which left me with a headache and sore hands. Even the rough tarmac on the lower section of the climb was a relief to ride on. 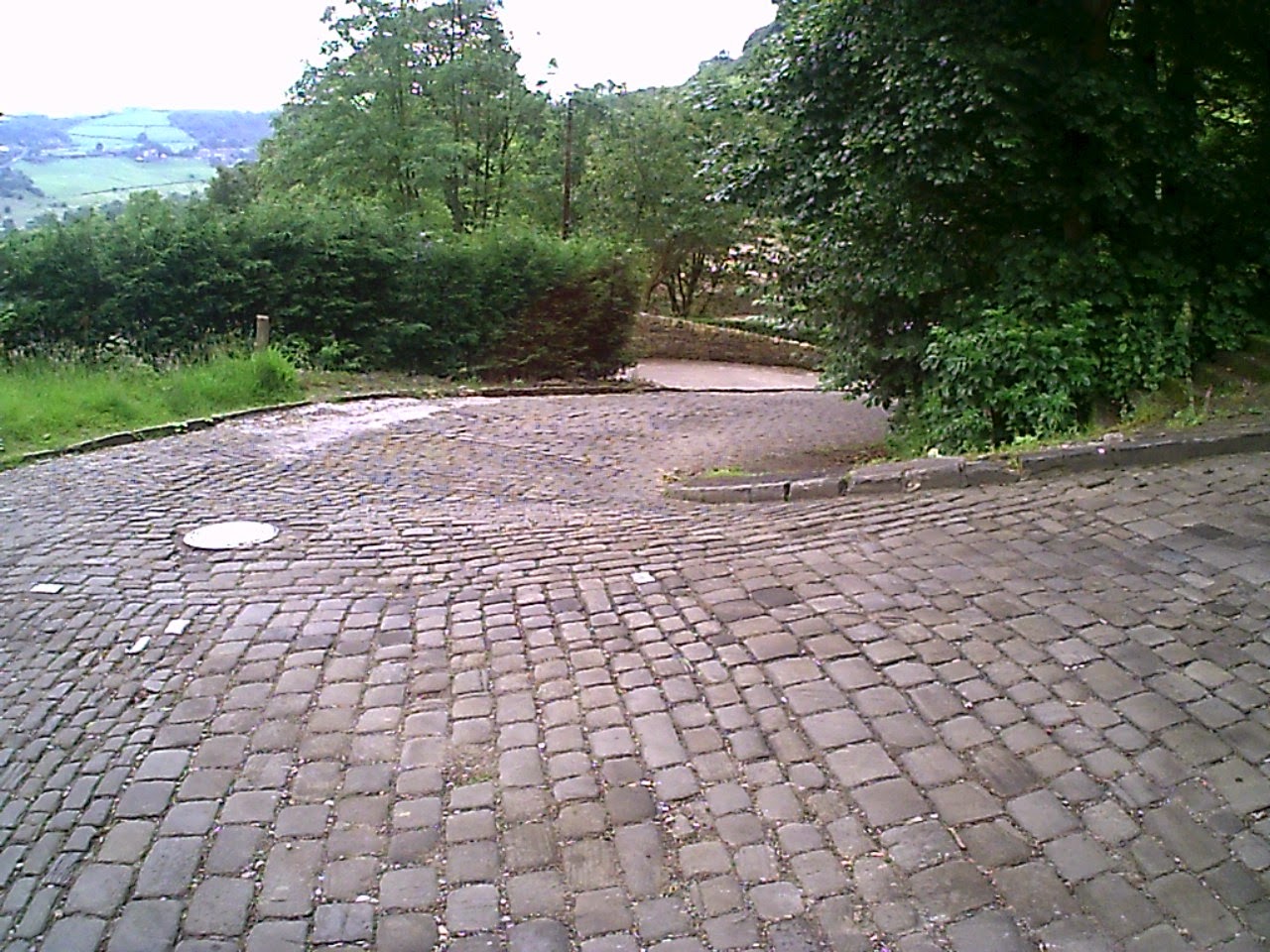 Its as if somebody decided the hill wasn't tough enough to get up so they added a steep
hairpin and covered the damn thing in cobbles.


Getting back to the car I felt quite pleased with myself for having taken on Shibden Wall and surviving the experience. Feeling pleased with myself lasted for approximately one minute as on firing it up my sat nav decided the only way to go home would involve driving up the cobbled nightmare I'd just experienced on the bike. The hill seemed even worse in a car despite having suspension and soft fat tyres and twice on the same day I felt a deep sense of relief when the ski slope and smooth tarmac at the top of the hill came into view.

Shibden Wall may well be the last of the 100 climbs that I tackle for a while. Recent changes in jobs and a new career direction have resulted in me being self employed. I like working for myself but, as anyone who is self employed will tell you, it isn't easy and my spare time is very limited (which is the main reason why this blog update is so overdue). I'm still getting out on my bike, it is afterall helping to keep me sane, but I'm unlikely to be able to take loads of time off for biking adventures in the near future. In fact I still haven't finished the bling and slightly retro rebuild of my Surly Cross Check. Its propped up across my office from me as I type this looking very sad and only partially built waiting for me to lavish the care and attention on it that it deserves.


I will return to the 100 climbs as I can't turn my back on them having come so far. If all goes well with the business I may be able to arrange a brutal short weekend in November to tackle some of the Lake District climbs but that does rely on work going well and the weather not turning too nasty too soon. All I can say is watch this space...
Posted by David at 16:41 No comments: