Wow, it has been a while since my last update. Sorry about that; been rather busy with all sorts of other things recently. Ironically this video has been edited for a while.

On the second of March I woke to find my car frosted over on another cold Northern morning. It was my plan to ride the Tan Hill climb then head home. Getting to the climb was an adventure in itself as my route took me over the tops of the moors and I encountered a lot of icy roads. At one point I had to inch my way up a series of tight hairpins that were covered in ice. Thankfully my little Fiat doesn’t have much power but plenty of grip and taking it easy on the throttle ensured I got up and down most of the icy bits with no drama. 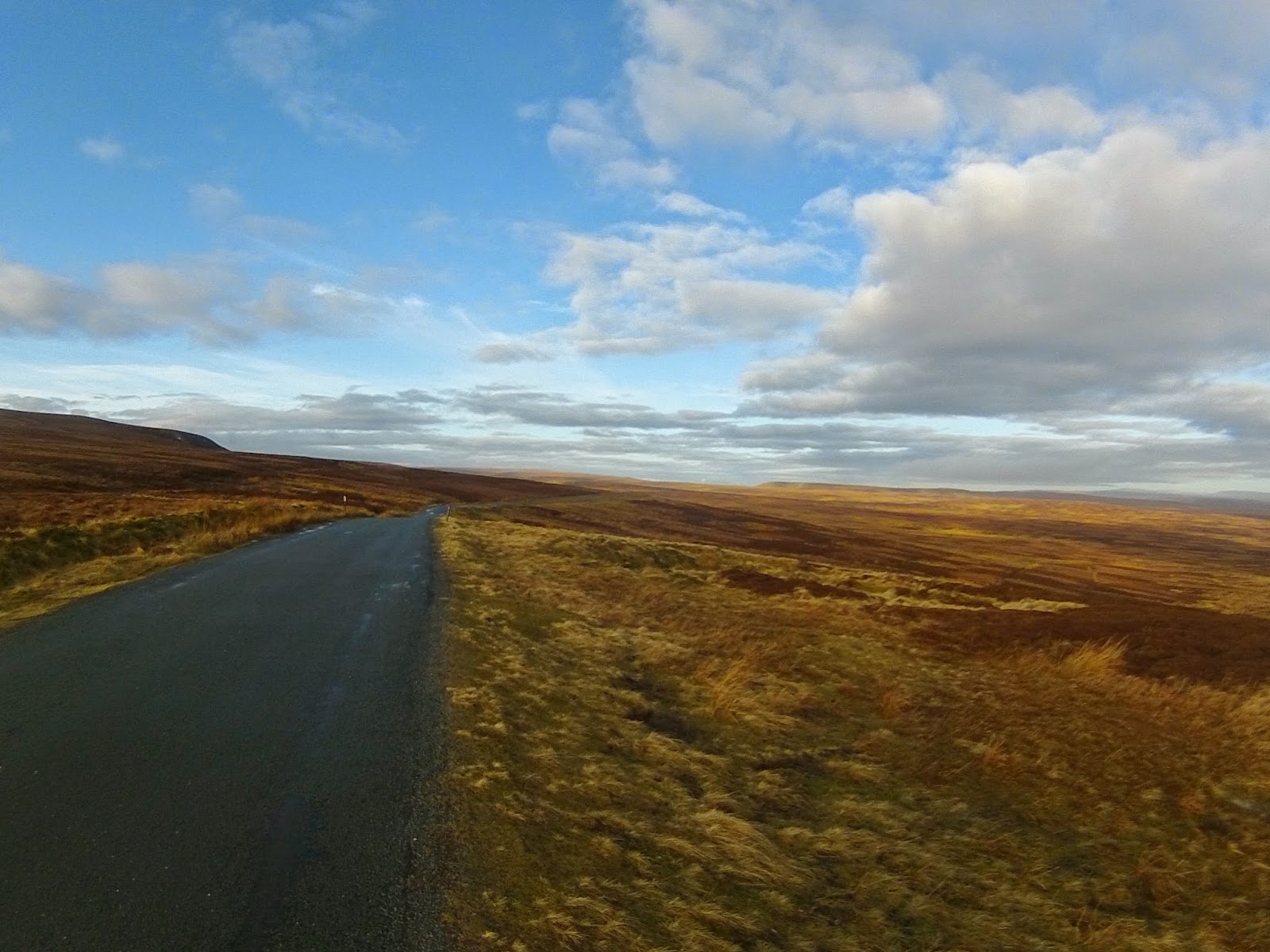 Tan Hill was mile after mile of roads like this. I got bored, guess I missed having some hairpin bends to grind up slowly

As I got closer to the start of the climb I realised I was driving down the climb known as The Stang. I was briefly tempted to ride this climb instead of the one up Tan Hill as it would mean spending less time being frozen to my bike. The layer of ice on the steeper lower slopes soon put me off and I decided that the relatively gentle gradients of Tan Hill would be an easier bet in the conditions. 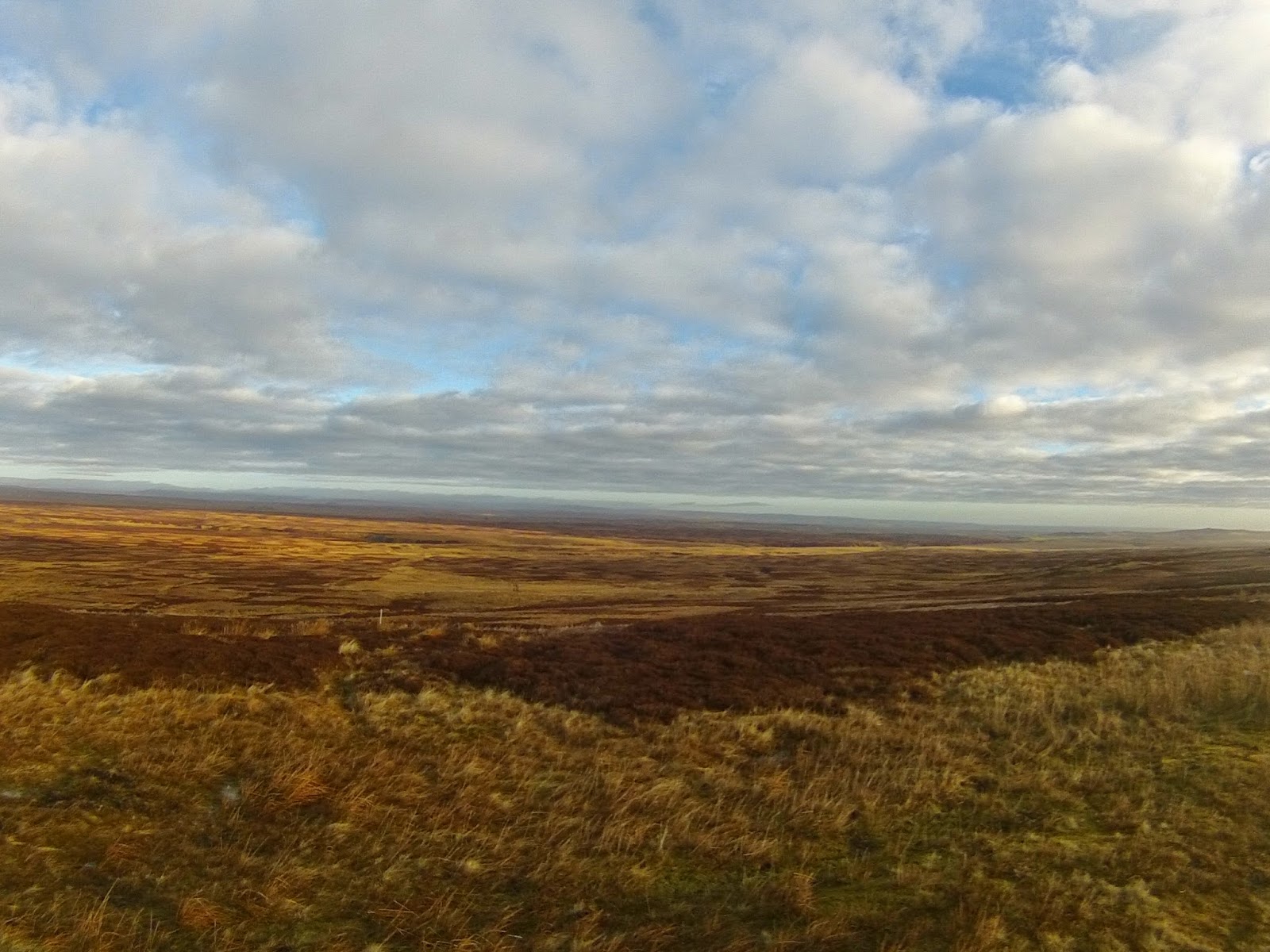 This would probably be a lovely view on a nice day. On an overcast cold day it was just big, bleak and slightly depressing


The day before had started cold but turned into a beautiful day with clear blue skies. The weather on the second was cold gray and overcast with a strong chance of rain. The conditions couldn’t have been more different. Nor could the climb; all of the rides the day before had taken place on clearly identifiable hills. The ride up to Tan Hill is essentially a ride up over the moors until you reach the top and it was hard to believe I was on the right bit of road right up until I crested a slight rise and saw the Tan Hill Inn. The road just gently climbed for mile after mile with no discernible end in sight.


Getting out of the car I was struck by just how much colder it was at the top and I spent most of the descent trying not to get too cold. It was a long descent and I quickly realised that I was probably going to get bored on the way back up. Apart from a few 10% ramps the climb is very gentle with moor land views all around. On a spring or summer day it would be a pleasant uphill meander. On a grey bitterly cold day in early March it was all rather uninspiring. I think that’s why it has taken me so long to post this blog update; I was just bored by the whole experience of riding up Tan Hill. My mood wasn’t helped by the fact that the icy cold wind turned one half of my face numb, or by the sudden deterioration in the weather as I reached the top. I was pleased to just get back into my car, turn the heating to the max and start heading home.

It had been my intention to have ridden a few more climbs by this point in the year. Since my last trip up North to tick of some climbs I’ve been very busy with work and driving some massive mileages during the week. Its left me feeling unwilling to get into a car and spend hours driving up and down the motorway network at the weekends. I cancelled one trip at the last minute when I realised I was just too knackered to make the journey, let alone ride the climbs.

Don’t worry, I fully intend to complete the 100 climbs, its just that I haven’t had the energy or motivation to throw myself into completing the challenge in the last month or so. There are a few things on the horizon that should hopefully help me regain the energy and time to start crossing some more climbs of the list. I’m actually in decent condition for the steep challenges that await, I just need to free up the time. My venerable old Surly Cross Check is about 50% rebuilt in its new bling guise and it may even make a comeback for some of the remaining rides. I love my Uncle John but there is something about the way the Surly handles that makes me want to put it through its paces in the mountains again.

Watch this space…
Posted by David at 20:06 No comments: