After completing the climb up to the top of Buttertubs Pass it was still quite early in the day and time for breakfast. I drove down into the village of Hawes and tried to find a shop that hadn't only just opened and actually had properly stocked shelves. Don't get me wrong, Hawes is a lovely little place with a lot of shops but I seemed to get there before they were all open. I settled on a couple of pork pies, and a slice of chocolate cake. Hardly a great breakfast but it was at least full of sugar and carbs.

For the energetic 100 climbs rider there is always the option to combine Buttertubs Pass and Fleet Moss into one ride as they are so close together. In fact the climbs I rode on the 21st June are all very close together so it would be very easy to plan an epic day out on the bike bagging climbs.

Hawes was busy getting busy for the Grand Depart of the Tour de France which was due to take place on the first weekend in July and the place was full of colourful banners, bunting and seemingly every conceivable variation on using the bicycle as street art. It was great to see.

The climb up Fleet Moss, as with so many I ride, started with a descent. The top part of Fleet Moss is a almost dead straight 20% ramp. Riding down it from where I had parked the car was as thrilling as it was dicey; the road surface is a bit rough in places and even my ever capable Uncle John was getting bounced all over the road. Not sure how fast I was going as I no longer ride with a bike computer; the speed I do uphill is so slow its depressing to see it displayed and when going downhill I reckon if you have time to look at a little screen on the handlebars you clearly aren't going fast enough. 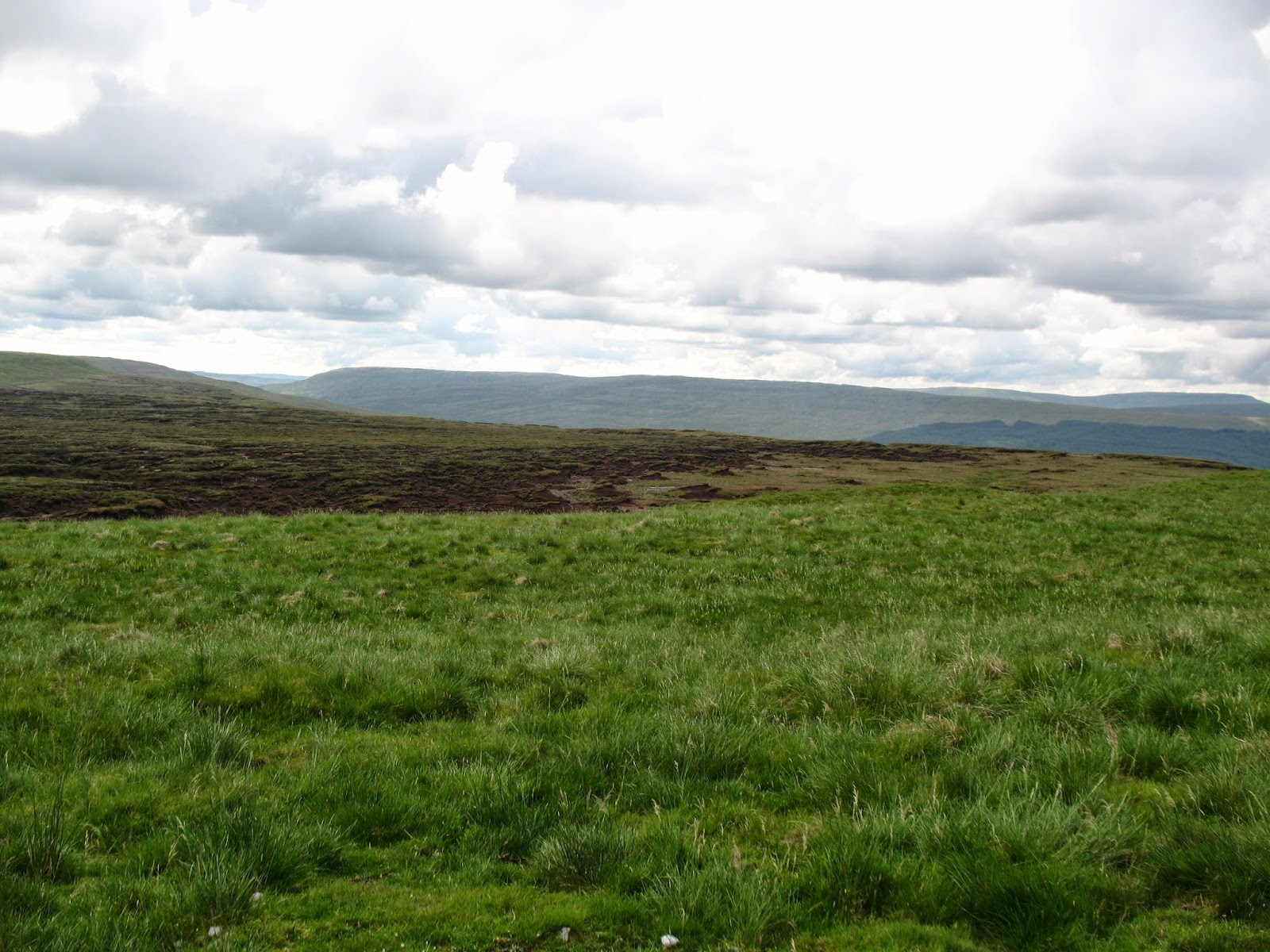 Once at the bottom of the climb the first section on the way back up was a 17% gradient ramp up from the valley bottom. It is only a short uphill section and once you reach the top of it you are greeted by a nice rolling bit of road that tracks the edge of the valley. The day was starting to warm up nicely and it was a really pleasant bit of road to cycle along. This easy section goes on for about a mile but before long you are greeted by the site of the 20% section of road stretching out ahead of you over the landscape. Got to hand it to the road builders of Yorkshire, they don't bother with pansy hairpin bends; they just build their roads straight up and over anything that gets in their way!

At this point in the climb I stopped briefly to activate Ass Cam TM before tackling the really steep stuff. At this point I was passed by a couple of cycle tourists enthusiastically trying to spin their pannier laden bikes up. As the gradient got steeper they started to get slower and then eventually decided that pushing their heavy bikes was the only way to get up the climb. This presented me with a problem. As regular readers of this blog will know I'm pretty damn slow on the really steep stuff and once I hit bottom gear things get even slower. There was no way in hell I was going to risk getting passed by a couple of cycle tourists once I had passed them ( I really do ride that slowly) so I had no choice but to keep the bike in a higher gear than usual and keep on cranking the pedals round. It wasn't pleasant and sent my ever fragile right knee into a painful spasm but there was a point of pride to defend. I did manage to keep a decent gap over the tourists behind me but I got slower and slower as I ground out the pedal revs. The slackening of the gradient at the top of the 20% section was very welcome and I found the rest of the climb pretty straight forward from that point on. The top of the climb feels very bleak in comparison to the lower slopes but the two final bends aren't anything too taxing and I had a fairly easy ride back to the car. 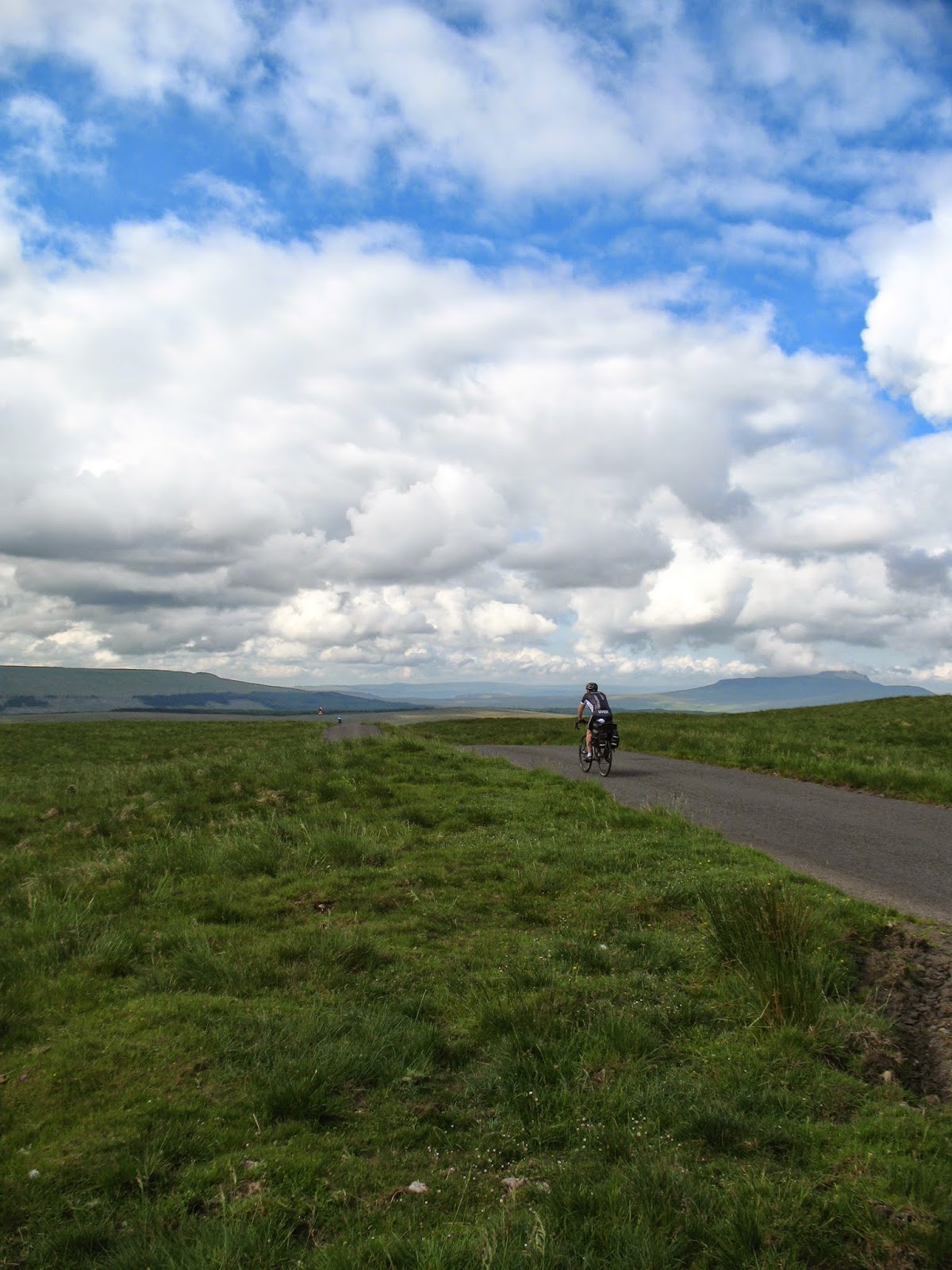 Pretty much every stretch of road in Yorkshire seemed to have cyclists on it, a lot of them tacking the hills with a full touring set up complete with panniers.

I had to chuckle once I got back to the car and started putting the bike away; the two people on tourers crested the top of the hill and said 'well done' to me. They're the ones who hauled panniers up the climb and yet they were telling me well done. I of course told them well done and said I hoped that they had a decent days riding ahead. My next challenge was the climb up Oxnop Scar and my right knee clearly hadn't appreciated my efforts to push a bigger gear up Fleet Moss so I would have to take it easy.
Posted by David at 11:24 No comments:

For reasons that will become clearer in a later post my 100 climbs riding is going to be put on hold for a couple of months. However, I wanted to take a break from it all knowing that I had been able to tick off a few more climbs. With that in mind I took a short break over the weekend of the 21st June, which was also handily the longest day, to finally lay the last five climbs in Yorkshire to rest.

I drove up on Friday the 20th with the intention of riding four climbs on the Saturday. The fact it was the weekend of the longest day would give me the chance to start off early when the weather conditions were cool and hopefully get the first four climbs done by mid afternoon. After that I would have a chance to recover, have an early night and then take on the fourth climb, the fearsome Shibden Wall on the way home on Sunday morning.

My accommodation for the weekend would be the Travel Hovel TM at Scotch Corner. It is a very handily located place to stay if you are trying to take on the North Yorkshire climbs on a budget although not the best accommodation in some ways. The journey up on the Friday should have taken  no more than six hours. Because of road works and various accidents it ended up taking eight hours. After spending too much time stuck in a car in hot weather I was still able to get up at 5.30am the next day and get myself sorted in enough time to be at the top of Buttertubs Pass for about 7.30 on the Saturday morning. It was a bit breezy and cool up at the top which suited me just fine. I've never gone too well in really hot weather so it was nice to find my trip up North had taken me away from the stifling heat of the South of England. 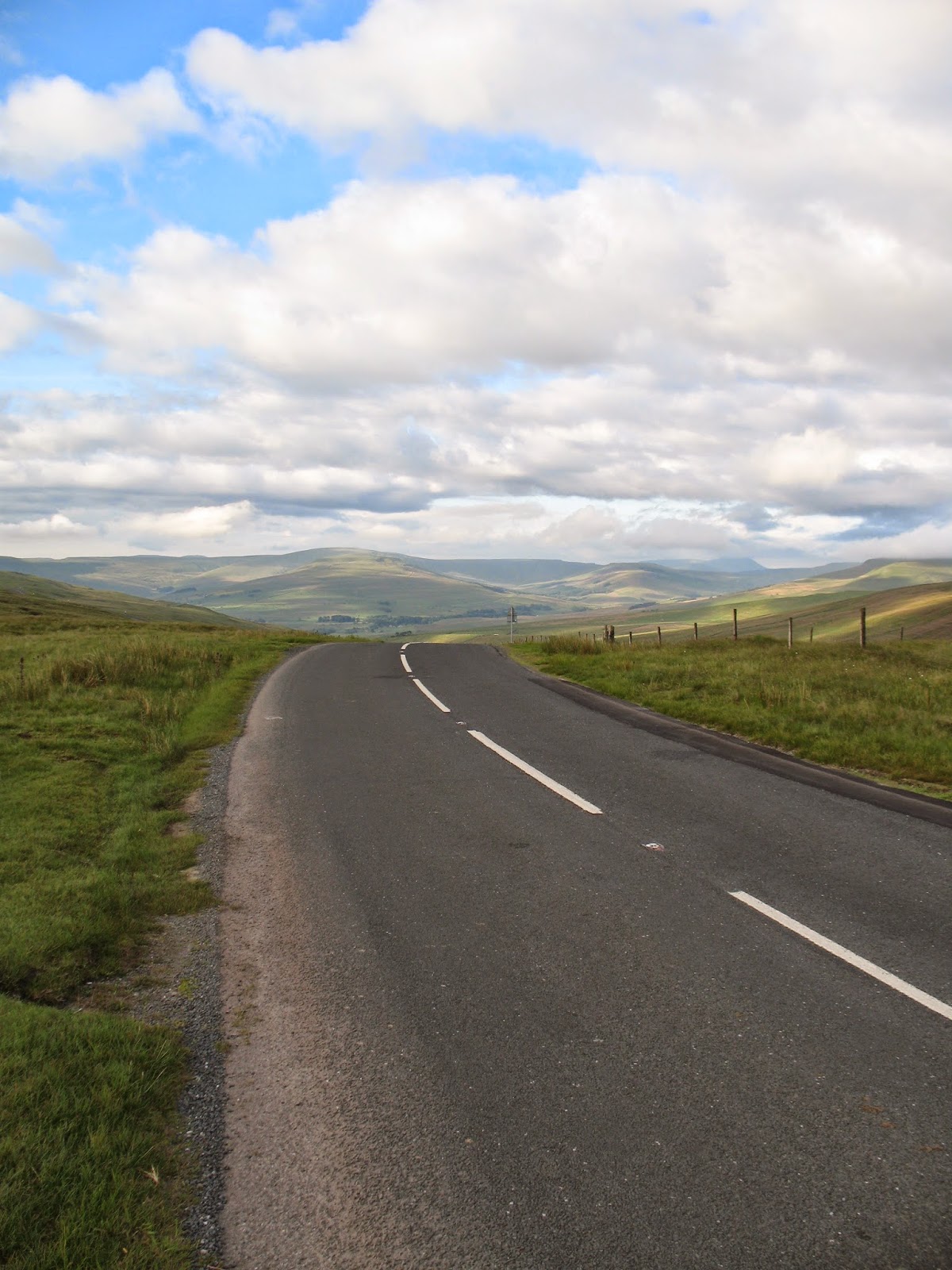 
Driving to the top of Buttertubs from the Travel Shack was really interesting as I was able to cover a bit of the 1st stage of this years Tour de France route. For 100 Climbs fans it is important to note that while le Tour does take in Buttertubs the route in the little black book of pain will actually be the descent that the riders take on; they will be riding up Buttertubs from the village of Hawes. It will be a nice fast and tight descent and the roads that it will spit them out onto once they reach the bottom are tight, undulating and potentially quite dangerous for a peloton of over 180 riders. My prediction for the 1st stage of the 2014 Tour de France? Crashes, and sadly probably quite a few. The off camber 90 degree bend at the bottom of Buttertubs will be an interesting test for the peloton.


Hopefully when Chris Froome and his rivals start the descent of Buttertubs they won’t be half asleep as I was. Halfway down there is a steep (25% gradient) hairpin bend. The Tour organisers had already put up warning signs to alert the Tour riders of its presence. Needless to say in my half asleep state I came close to overcooking it and ploughing through a dry stone wall. Its actually quite a fun descent and I’m looking forward to seeing how the pro’s take it on.

The climb up Buttertubs starts with a gradient of around 14%. After a bit of a slog to get going it eases off a bit and the bulk of Buttertubs can be seen ahead of you, as can the road stretching onwards and upwards. The 25% gradient hairpin bends seem a long way away from you when you start this climb and whilst they aren’t as fearsome as you might think they will be, you will have expended a lot of energy by the time you reach them. This does make the kick up in gradient a bit nastier to deal with so its important to leave something in the tank on the early slops. Make sure you look left as you crest the left hand hairpin bend as the view of where you’ve just come from is great. 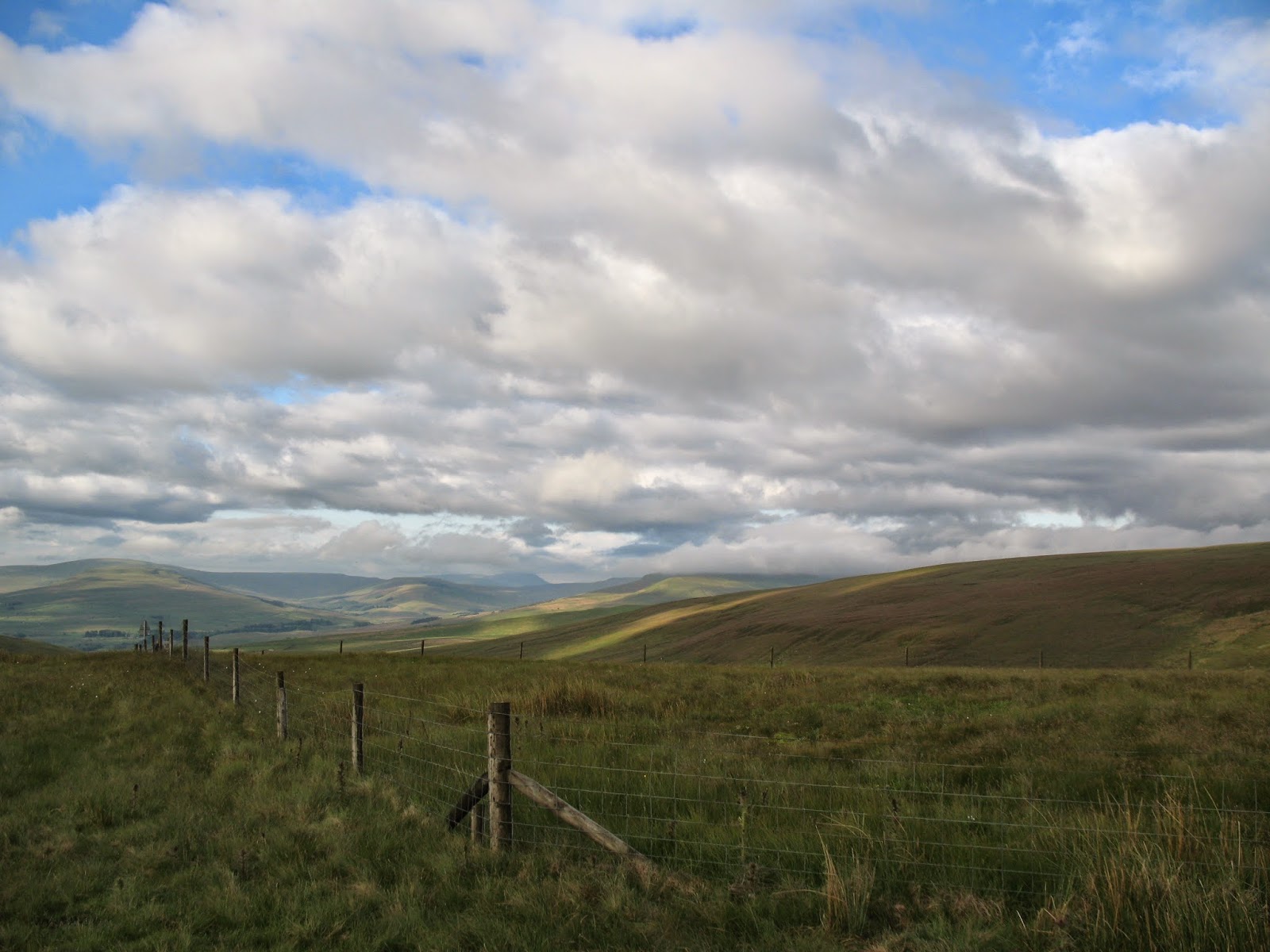 I had picked a beautiful day for my trip to Yorkshire

Buttertubs has a fun fast element to it. Well, OK, it actually has a nice fast downhill section a little further along from the hairpin bends. I found it a welcome break from slogging uphill and it let me recover a bit before the final slog up the last significant ramp up in gradient before the final cruise along the top to the final cattle grid. It also allows you to take in a great view of the surrounding countryside.

Overall I quite liked Buttertubs Pass. I was a bit tired when I started it but by taking it nice and easy it was a fairly enjoyable ride and a good start to my day of hill climbing. After packing the bike away it was time to head off into nearby Hawes to grab some breakfast and then take on Fleet Moss.
Posted by David at 21:32 No comments: