Its taken a while to get this ride written up and the video sorted. Both my work and home life have kept me pretty busy recently and I guess I've struggled with the energy and focus to get it all sorted.

A few years ago when ticking off some of the climbs in the Peak District and the North West I tried to ride the Cat and Fiddle. It was the middle of the week and late in the morning as I drove from Buxton to the Cat and Fiddle pub and the weather was appalling. It was over cast and astonishingly windy. As I pulled into the pub car park I struggled to open the car door and all I could see was a seemingly endless stream of lorries thundering along the road. I pretty much decided then and there that riding the Cat and Fiddle that particular day was a no no and that moving on to ride Swiss Hill was a better plan. I did stop for lunch in the pub first though.

Of course, I still had to ride the Cat and Fiddle at some point and I reasoned that because of its location and length, and traffic levels, I would be better served doing it as part of an overnight trip; drive up on a Saturday, ride it first thing on the Sunday and then drive home again. Simple, right?

On the 18th March I drove up to Macclesfield ahead of riding the Cat and Fiddle. My aborted attempt a few years ago wasn't entirely a waste of time as I found out at the time that there is a Travelodge at the base of the climb. I was a bit disappointed to find out that the annual fair was in town and that the car park in front of the hotel was full of brightly lit, noisy spinning fair ground rides with crowds of local chavs getting drunk and nauseous. Thankfully everything was quiet by 10pm as I had feared I wouldn't get any sleep. 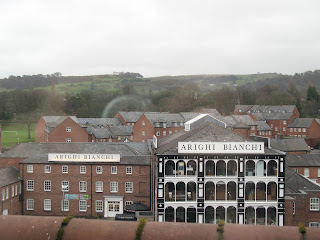 
Because I was several floors up and there were so many people wandering the streets of Macclesfield that night I was reluctant to keep my bike in the car and so took it into my room. Nothing unusual there but come 6.30am the next morning when I was ready to leave and tackle the climb I couldn't resist going for a quick spin along the 4th floor corridor. Lets face it, I've spent enough time in hotels with nothing but a bike for company that it was bound to happen at some point and besides it was genuinely the quickest way to the lift. I'm thinking of a companion series of hotel bike rides to complement my remaining 100 climbs efforts; Moutain bike in a Premier Inn anyone? Fat bike in a Best Western? The possibilities are endless. 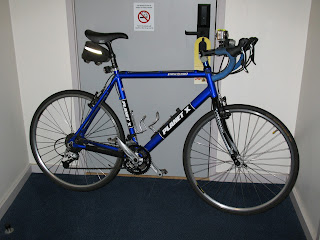 We all knew this was going to happen eventually...


The first part of the ride up the Cat and Fiddle isn't as bad as it looks, more of a long gentle drag out of the edge of town. I started off at an easy (slow) pace as I knew it would be a long climb and I couldn't see much of the top of the moors from my travehovel room window because of low cloud. I figured it was best to take a measured approach and leave something in the tank. It soon became clear to me that taking it easy was going to be necessary because despite the overcast morning I was starting to overheat pretty rapidly. My shades steamed up and I was soon unzipping everything I could get away with. On such a long climb its easy for the temperature to rise, especially if you are tapping away at a steady but slow pace like I was. 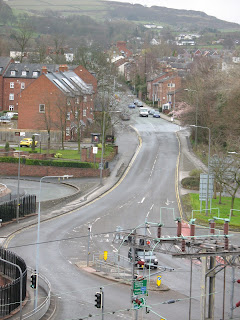 
About halfway up the climb the temperature started to drop as I slowly moved away from the suburbs and into the more rural sections of the road. The more remote things started to feel the chillier it got and the stronger the wind became. The gradient on this climb never becomes too taxing and once you get to the half way point you also start to encounter the odd down hill section which offers a bit of relief from the constant uphill efforts. Unfortunately the wind also started to pick up around this point and the downhills weren't as much of an enjoyable coast as they could be. In fact it got much colder and windier and the final big ramp up to the summit became a bit of a slog as I turned a corner and got hit full in the face by a vicious cross wind. The visibility also took a major downward turn with low cloud sweeping across the road. Even though the pub that marks the summit wasn't far away I had to lean into the wind to make it there. The pub is shut these days but seeing as how on both occasions I've been there you would have needed beer glasses made of solid lead to stop them flying across the beer garden its perhaps not that surprising. There was a group of local club cyclists catching their breath in the car park when I got there. They had passed me on the way up and I'm not sure who was the daftest; them for continuing across the top of the hills in the poor visibility and high winds or me for trying to make my way back down to Macclesfield with a biting cross wind.


After a quick stop to catch my breath it was time to venture out into the growing murk and head, seemingly sideways back down to the bottom. The first couple of miles heading back down involved a lot of leaning at crazy angles into the wind whilst trying to navigate fast down hill corners. It wasn't a relaxing coast back down the Macclesfield and by the time I got back to the Travelshack I was knackered and cold. I had hoped for a triumphant downhill sweep back to the hotel but instead had a nervy wind blasted tooth loosening clatter back down to the bottom. Once at the bottom I did decide to put my bike back in the car though rather than taking it for a farewell spin around the hotel reception; it was a bit dirty by then.

On the whole I really like the Cat and Fiddle. 6am on a cold Sunday morning in March probably isn't the best time to ride it but I love the way the climb takes you from the middle of Macclesfield, past the suburbs and into the wilds of the moors above. You get a real feeling of going on a journey with this ride instead of just grinding your way up to the top of a wind blasted peak. Its a climb I'd like to do again, a bit faster and in better weather, but this ride will have to do for now. Its certainly one I'd recommend. I will be back.

Oh yes, I'm off the North Eastery shortly. I've got five climbs and well over 1200 miles to try and knock out in 3 days. Good job I enjoy this sort of thing.