Since the end of last year I have been experimenting with a cheap helmet camera. I figured if I'm going to cycling up hills and ask for people to make donations to charity I should at least prove I'm doing what I say I will. Besides, there is always the chance that the resultant videos could be mildly entertaining.
With this in mind I purchased the worlds cheapest helmet camera. Its been a useful experience but as I sit here trying to edit together some form of light hearted trailer for my forthcoming rides I realise it is as crap as it is cheap.
Not only has the camera come with a manual written in gibberish of the very worst kind the battery doesn't seem to hold it's charge for very long and the damn thing gets red hot as soon as you start to charge it. Probably because it was churned out in some Chinese sweatshop the camera is also convinced that we are still living in 2008 and insists on date stamping every damn video it records. I don't speak gibberish well enough to figure how to get rid of the date stamping.
So, with a heavy heart and a groaning credit card I decided to upgrade to a camera that comes from a manufacturer whose name I recognise, and can pronounce, and bought an Oregon Scientific ATC Mini camera.
Key highlights:

The one main downside is that the camera is quite a lot larger than the one it is replacing and I now look like I'm cycling round with a small brick on my head. Mind you, one of the reasons I decided to go with the Oregon over the more popular Go Pro Hero camera is that the latter looks like an even larger small brick. In silver. It is also half the price of the Go Pro but returns the sort of picture quality I want. So far I've had it out on one ride and the quality seemed OK, the camera does seem to be a bit slow in adjusting to differing light levels but everything else seems as expected.
The old Chinese knock off will live on however. I think it's small size means that it is well suited to being mounted in unusual places, perhaps on the back of the bike pointing downhill to help capture the steepness of some of the climbs I'll be taking on. At least there the over sensitive microphone won't make me sound like an elephant having an asthma attack. 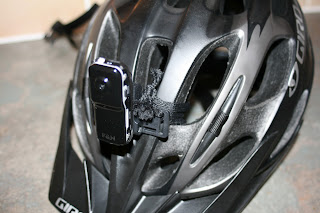 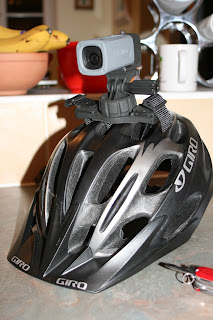 The new camera with it's 'look at me I'm filming stuff with my head' looks.
The new camera is a bit obvious to say the least and I feel a bit of a tool just riding around with it.  I'd like to make my excuses now about the appalling aerodynamics ruining my speed but who am I kidding?
Posted by David at 17:03 No comments: