The summer holidays are here…time for a break

Well, that isn’t strictly true; the summer holidays are here for everybody with children at school and to avoid hassle with overly busy roads, long delays in traffic and finding accommodation I’m putting the hill climbing on hold until September. Travelling between the hills is time consuming, and sometimes stressful, enough and I could do without adding to that by having to deal with tourist traffic. I’m also entering a phase in this challenge when I will need to spend several days away from home in order to tick of the climbs in different parts of the UK now that I have pretty much finished the South West. Finding somewhere to stay at the height of the tourist season will be difficult, and pricey, so I think it is better to spend August preparing for the next phase of my 100 climbs challenge and be ready to start making progress again in the autumn. That isn’t to say that I’ll be taking it easy on the beach with a beer in the meantime. In fact August is going to be a pretty busy month as I prepare to take on the climbs in Wales.

From September I’m intending to start taking on the 80 of the remaining climbs region by region with Wales as the first target. The planning has started and I’m already past the stage of plotting out where the climbs are and the route to follow. I’m going to start with the climbs in South Wales on one trip and then return to Wales to tackle the climbs in the North. Some of the Welsh climbs are pretty fearsome combining steep gradients with some pretty lengthy sections of road. Suffice to say I’ll be doing some fairly serious training rides during August in an attempt to prepare. I’ll probably still end up wheezing my way to the top of every Welsh climb in bottom gear at one mile an hour but at least I’ll be well prepared! 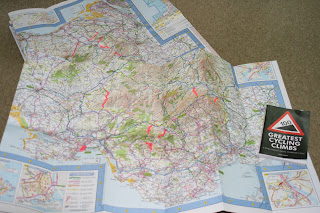 One thing you need when taking on the 100 climbs is a lot of maps. Just as well I like looking at them.

As well as spending a lot of time grinding my way up the steepest hills North Devon can offer for training I’ve got a new bike to build. It was my intention to use my old Bianchi road bike as a lightweight hill climbing machine. Unfortunately the build has been problematic and I’ve ended up with a bike I’m not overly happy with. Using my Surly Cross Check for the first 20 climbs has taught me a lot about the sort of bike I’m happy with in the hills and I’ve made the decision to strip the Bianchi down and use most of the components on it to build up something completely different based on a frame and fork I picked up cheap off the interweb. More details will be released soon but I think I’ve made the right call. The Cross Check will be kept as a spare bike. In fact it is three years since I first built it up and the poor thing is looking and feeling rather tired. At some point in the next few weeks I’m going to give it a complete overhaul and maybe even finally get around to cutting down the steerer tube to an aesthetically pleasing length.

I need to get some new kit sorted out over the summer as well. One of the most important things I need to sort out is a replacement for Ass Cam which sadly died only a few rides into the 100 climbs. Having a rearward facing camera is really good for showing the gradient on the climbs and also makes my slow moving videos slightly more interesting. I’ve found a camera I think will do the job but I’ll need to spend some time testing it and getting the mounting on the bike right. Perhaps unsurprisingly camera makers don’t make seat post mounts and some improvisation will be required.

Anyway, after a productive weekend getting in some useful training rides I’m off to undo all the good work with a couple of beers…
Posted by David at 21:54 No comments:

I was hoping that this would be a write up of how I ticked Weston Hill and Dover’s Hill off the list within 24 hours of each other. Unfortunately my plans to ride Weston Hill in Bath didn’t quite work out.

The plan was simple, I had a couple of days meetings in Oxfordshire planned and I would take on Weston Hill on my way to the first and then Dover’s Hill the following day after my meetings finished. My day started well enough and I left the house nice and early but my journey into Bath took longer than was ideal and the closer I got the slower I went. By the time I got to the foot of Weston Hill time was against me and it was clear that I wouldn’t have time to complete the ride, find somewhere to get changed and then get to my meeting. Work had to come first so I had to abort. The good thing is I got to scope out the climb, find a decent place to park near the top. I also thankfully found a quicker route to get to the climb for when I have the time to go back.

Dover’s Hill was a lot more straightforward. After a day sat on my backside in meetings I only had to drive about thirty miles, do the climb and then go home. Of course that was the theory. My first main problem after leaving work was finding somewhere to get changed. I was on a tight schedule so decided that it would be more time efficient to get as close to the climb as possible before getting changed in a lay by. Changing out of office attire into cycling gear requires a certain amount of nakedness and finding a quiet lay by was difficult. I had to get changed using the door mirrors to figure out when cars were passing. I also managed to drop a sock in a puddle which was less than ideal. It isn’t an experience I’m looking to repeat anytime soon!

Once I had managed the most stressful change in clothes in history I drove onto Dover’s Hill and after finding it (I naturally drove past it the first time) got parked up and rode down to the start. I’m glad I didn’t wait until getting to the hill before getting changed as it seems Dover’s Hill is a popular spot with early evening dog walkers.

Dover’s Hill is actually quite a pretty little climb out of an attractive Gloucestershire village. Sadly I wasn’t able to fully appreciate it as two days in meetings had left me feeling below par. The legs were working OK and the climb isn’t particularly steep but I huffed and puffed my way to the top like a 60 a day smoker. It probably didn’t help that there had been a heavy shower before I got to Dover’s Hill and as I coasted down to the start I got completely soaked. Despite the now familiar soundtrack of my laboured breathing I actually found the climb pretty easy to complete and it was nice to drive back to Devon knowing that I had completed the 20th climb out of the 100. Driving for three hours in damp cycling shorts isn’t something I intend to repeat but after the earlier hassle of getting changed in public I couldn’t face going through the experience all over again.
Posted by David at 20:43 No comments:

I thought it was high time I finished off the climbs in Devon and so set off early on Saturday the 30th to take on Haytor Vale and Salcombe Hill. Setting off early is pretty essential when riding on Dartmoor at this time of year as the tourist traffic can get pretty heavy. I prefer to do my uphill suffering without having to dodge caravans.

I parked up at the top of Haytor around 8am and coasted down to the start. It was a good opportunity to scope out the climb and the gradient and I was quite pleased to see that the gradient varied a lot along the length of the climb. This sort of variable longer climb suits me better as I like the chance to ease off on the flatter bits. A longer climb also lets me get a bit more settled into a decent pace.

The ride up to Haytor has two distinct sections. The first is made up of the lower slopes where the majority of the 12% sections lurk. This part of the climb is quite sheltered and there was a lot of water on the road surface from the recent heavy rain. The lower section of the climb I found out is also sheltered from the wind and I was able to make good progress and managed to last a bit longer than I usually do before dropping down into bottom gear. My gears gave me a bit of hassle just after starting off and an unplanned pit stop was required to fiddle around with the front derailleur. It was fairly easy to resolve although I did need to make some further adjustments once I’d reached the top of the climb. Apart from that the only other thing I wasn’t expecting on the way up the climb was encountering wheel spin on a cattle grid. I would like to say it was because I was riding so hard that my back tyre broke traction. In reality the surface of the metal cattle grid was soaking wet. Gave me a bit of a shock though.

The second section of the climb is made up of the upper slopes and is much more exposed. Unfortunately the exposed nature of the climb meant that I had to deal with a nasty head wind which really slowed my progress up the final stretch. I was relieved to get back to the car as the final drag up to the car park at the summit was made far harder than it needed to be by the strengthening wind. 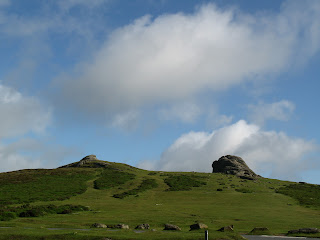 Haytor, looks impressive and sadly so was the strength of the head wind


After a quick breather at the top I loaded the bike into the car and headed off to Sidmouth to complete the final climb in Devon; Salcombe Hill.

Salcombe Hill is quite representative of the sort of climb I dislike. It is sort and steep, reaching a gradient of 20% at the top. The road up to the summit also proved to be very busy and it would seem the residents of Sidmouth don’t care much for cyclists and I grew pretty fed up with not being left much space by passing cars. Despite the steepness of the climb and the idiotic driving of a few motorists the climb was at least sheltered from the wind that had been an unpleasant feature of the top of Haytor Vale.


The gradient steadily ramps up as you ride up Salcombe Hill and perhaps unsurprisingly I got slower and slower the further up I went. Thankfully just as I thought I was about to explode I reached the top of the climb. Salcombe Hill was much shorter than I was expecting it to be and after a brief cool down on the flatter section of road at the top I was able to stick the bike back in the car and get home in time to watch the start of the Tour de France.

Next climb will be Weston Hill in Bath
Posted by David at 14:49 No comments: