Bit of an update

It dawned on me the other day that it has been a month since my last blog post. This wasn’t intentional but I’ve been busy trying to sort things out for the year ahead. Rather than the piecemeal approach to taking on the climbs that I took last year I need to be more organised and tackle climbs on a regional basis in 2013. This is why I now have a huge map of the UK covered in marker pen and sticky labels to look at and a wall planner. Never before in my life have I felt so anal about something that I’ve needed a wall planner but apparently that point has now been reached. Mind you the planner is still in its packaging so maybe I’m a bit more laid back about this whole thing than I initially thought. 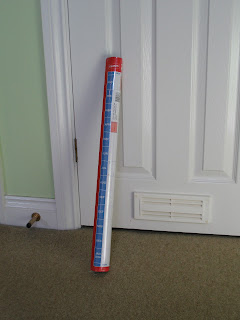 My planning for 2013 has started, honest

So far I have sorted out when I will be riding the remaining Kent and Surrey rides. They should hopefully be dealt with on a flying visit to the South East in late February. I say hopefully as the weather can still be a bit variable in February so I need to take the fact we are still in the depths of winter; Box Hill in the snow could be awkward. Mind you I do have some studded tyres in the garage…

In April I’m planning to spend a week taking on the remaining climbs in the Midlands, including the fearsome road up to Riber Castle, and a couple of the Yorkshire climbs. May will see me hopefully finishing off Wales and so on as I make steady progress up the country. The plans past May are still a bit unresolved at the moment but are rapidly taking shape.

On the training front January got off to a good start. Despite the appalling weather I’ve been getting up the local hills faster than ever before and feeling smooth on the bike. The only problem is that riding up lots of hills has left me good at winching myself up short sharp gradients but hopeless on longer rides. I’m going to need to build some longer easier rides into my training schedule or I’m going to be found wanting on the longer climbs. Keeping a decent smooth cadence on flatter rides just seems to confuse my legs at the moment which is rather disconcerting.

The only other problem has been that every single road I ride along seems to be rim deep in mud, bits of undergrowth and gravel. The winter weather hasn’t been kind to the roads of North Devon and despite wearing recently fitted mudguards my trusty old Surly Cross Check looks like it has just been fished from the bottom of a river. My Uncle John has only been out for one ride so far this year and it took me a while to get used to it; it feels a much stiffer and flighty bike than the Cross Check.

Hopefully getting my fixed gear bike finally sorted will help me sort out my pedalling issues. The On One Macinato is pretty much finished. Sorting out the chain line was a bit time consuming but the bike is pretty much there. I’ve struggled to get the brakes set up how I like them and that is the only thing holding me back at the moment. Hopefully an upgrade to better quality cables this weekend will let me take it on it’s first proper ride. So far I’ve only been up and down the street outside my house on it to check nothing will fall off. With spongy unresponsive brakes it has been a bit of a daunting bike to ride. My initial impressions of the bike are that it is sharp handling, responsive and potentially quite fast (with the right gearing) and I’m really looking forward to finally taking it on some decent rides. I just need to remember not to stop pedalling when braking or cornering as having to dig a pedal out of your calf muscle every so often quickly gets annoying.

Anyway, that’s all for now. Hopefully I’ll have a bit more to report back on with regard to the new bike soon. To be honest until I start getting stuck back into the climbs I feel like I’m just treading water.

Tis the season to be jolly in the garage

Some people like to spend the festive season eating and drinking too much. As I was working between Christmas and New Year I decided to spend what free time I did have more productively. There are only so many garish Christmas specials I can watch on telly so I have been busy in the garage servicing my bikes and building up my latest training tool.

I decided to get the build of the On One Macinato underway as I need to start using it soon. As it is destined for a hard life with a lot of winter riding I decided a sensible first step would be to waxoil the frame. Waxoil is smelly stuff and fairly unpleasant to spend time with in a small garage so after leaving the garage to air out for two days after applying a liberal coating to the inside of the frame it was safe to start installing the headset. I’ve gone for a Hope headset as I was able to get it at a decent price and even a simple bike can get away with the odd bit of bling. Like many home bike mechanics I fit my headsets with a mixture of proper and improvised tools; fitting the crown race took a lot of brute force and swearing but the rest of it was a doddle. 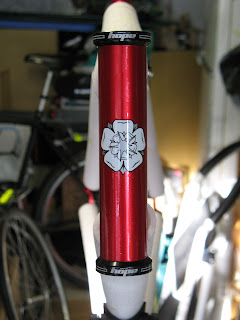 I’ve decided to do the decent thing and actually cut the steerer tube down to an acceptable length. I now have a suitable workbench and a clamp on guide for cutting steerer tubes so I really don’t have a excuse to not do it when I build a bike anymore. I have tried to avoid getting all medieval and taking a hacksaw to my bikes in the past but the whole process seemed to go OK and I suspect the Uncle John will be receiving the attention of my hacksaw blade before long.

My local bike shop has been helping me put together the drive train. I’m going to start off with a 40 tooth chain ring and 19 tooth rear cog. I suspect that gearing may be a little high for some of the steeper North Devon climbs but then the whole point of the bike is to build something that will help me up my strength so maybe that won’t be such a bad thing. The chap who runs my local bike shop also knows a thing or two about building wheels and has put together a lovely back wheel for the Macinato. A fixed back wheel is a lovely looking thing with a sparse clean appearance. To somebody like me who has only ever ridden bike with freewheeling hubs the fixed back wheel is also a slightly frightening concept. Not being able to freewheel will take a bit of getting used to so I’ll be fitting flat pedals for the first few rides. I’ll also be equipping the bike with two brakes. I know it is trendy to fit a fixed gear bike with only one brake (at the front) but I’ve been a dedicated avoider of fashion my entire life and I like the idea of two brakes. I do after all live at the top of a hill. The SRAM Rival brakes from my failed rebuild of my old Bianchi will be handling the stopping duties. 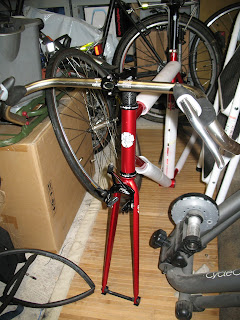 There is something very satisfying about watching a bike come to life. It now has wheels and just needs a bottom bracket to be ready﻿

My venerable old Surly Cross Check has also been receiving a bit of attention. I’ve been meaning to get it resprayed as the paint is looking really scruffy after three years of hard use. However, there is still a bit of life left in the components currently fitted to it despite the scuffed look of the chain set and derailleurs. As a result the mudguards have gone back on and it will be pressed into service as my all weather training bike. Fitting mudguards is always a thankless task and seems to take longer than logic would suggest it should.

If I got it resprayed right now I would only end up putting the old stuff back in it which would be missing the point of trying to revamp it a little bit. I also want to keep the Cross Check as a spare bike in case the Uncle John develops any problems that keep it off the road; the schedule for next year is already shaping up to be a hectic one and I want to make sure mechanicals won’t get in the way of completing the remaining 70 climbs.

Planning for the year ahead

With 70 climbs still to go and a lot of leave to use up before the end of June I’ve started to plan my attack on the remaining hills. So far this has largely involved trying to get holidays booked and buying a large map so I can see where all of the climbs are in relation to each other. Actually it is a bit more complex and there is a lot of route planning and accommodation booking to do in the next few weeks. 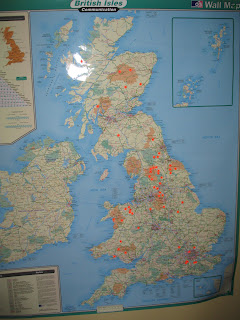 Behold, the map of fear. Actually I still need to add a few more climbs to it...﻿

If everything works out and I can get the training in over the next couple of months it is possible that I could reach the 80 climb mark by the end of June. I learnt a lot last year about what I’m able to do, how the travelling impacts on my ability to get up some of the climbs and just what my weaknesses are. I think tackling another 50 of the climbs by the end of June is a realistic target, albeit one that is going to require a fair bit of discipline to achieve it. If I can manage it I can take my time over the final 20 climbs in late summer and early autumn. That’s the rough plan anyway. Now, I’ve got some more sticky labels to put on my map…