Slamming on the Anchors

Well, slamming on the anchors for now.

Bit of a difficult blog post to write this one but for the time being I'm going to have to postpone my efforts to complete all of the remaining 100 Greatest Climbs. Things haven't been going well for some time with regard to getting the time away from home to get the final few rides completed and after I had to call off a trip up to the North East earlier in June because of a few issues at home those issues have only become worse. To edit a long and difficult chain of events into a simple sentence; my dad is quite unwell at the moment. I was worried about leaving him at home when I was due to go away in June and called off the planned trip. Fast forward to the end of July and I ended up having to go all emergency services and call an ambulance for him. It turned out to be far less dramatic than it looks on the telly but was nonetheless stressful.

Nearly six weeks on some of the problems my dad is facing have been sorted, some have not and it is clear that any plans I had for a cheeky trip up North this autumn in an attempt to get things back on track are well and truly out of the window. Right now I have neither the time or energy going spare to finish of the remaining climbs and I'm not sure when I'm likely to have either. I should be in the finishing strait by now (well, I should have been some time ago but life has rather gotten in the way) but things have gone a bit Pete Tong.

I am still getting out on my bike but not as much as I would like or my sanity requires; my energies need to be directed elsewhere at the moment. Besides, my touring bike is in need of a full rebuild, my single speed has a knackered wheel, I've managed to break my hack bike and a simple repair job on my folder resulted in me having to take a hacksaw to it. Yes, my bicycle maintenance skills remain top notch as ever; I still have to pluck up the courage to explain the whole hacksaw thing to my local bike shop. 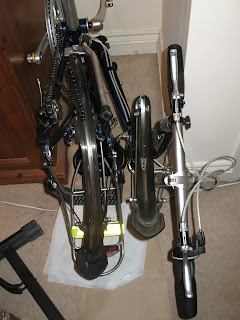 Anyway, thats all for now. I'm pretty gutted at everything that has happened recently but rest assured I will be back to complete the remaining climbs but not for a while. Other things have to come first right now.
Posted by David at 21:47