Back In The Saddle

Its happened; after a year or so of failing to find the time to ride my bike, let alone complete my quest to ride all of the hundred greatest cycling climbs, I finally managed to bump start my efforts back into life.

After a Friday afternoon spent stuck in traffic (I'm convinced our motorway network is fundamentally broken) I found myself in the not exactly inspiring Chadderton on the outskirts of Oldham. After spending six hours in the car I was pretty knackered (I am out of practice afterall) but I had the comfort of a Travelshack and a cheap burger from a dodgy local takeaway to look forward to before riding two climbs the following day.

Like every Travelshack I've ever stayed in I had an appalling nights sleep. Why do they always crank the heating up to blast furnace levels? Surely the staff should know that if you walk into a room and your eyeballs instantly dry up the heating is probably on too high. Despite turning the heating in the room completely off I still woke up feeling drier than a mummies armpit the next morning. The ferocity of the heating was matched only by the volume of the police cars that seem to patrol the area in packs, at high speed, with their sirens on. I can only assume Oldham was on fire, or being invaded by aliens judging from the level of frenzied police activity. Maybe it was just a normal Friday night in Oldham. I didn't intend to find out; I had a nights sleep to try and salvage. 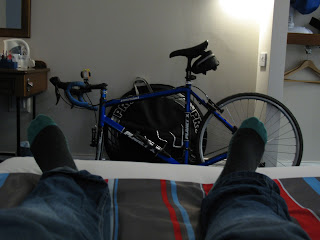 You know you're on a cycling trip when this is the view from bed...


The next morning I was up before it was light and heading to Ramsbottom to ride the infamous climb called The Rake. There will be a more detailed update complete with my legendary bad camera work to follow so I won't go into too much depth here apart from saying that I managed to complete the climb and it wasn't as bad as I thought it would be. Ramsbottom didn't inspire me all that much though. Its a town that seems to be completely surrounded by urban motorways and the whole area struck me as pretty grim.

The Rake was followed by a short drive along yet more grim stretches of motorway to the more rural setting of Sabden where I got to ride the Nick of Pendle. Not viewed as being as tough a climb as The Rake it still looked pretty fearsome, especially when viewed from the road that heads into Sabden across the other side of the valley, but once again I didn't find it too bad to ride. Sure, I was never going to set a fast time but I'm fairly happy with my latest efforts; they bode well for my more concentrated efforts to tick off the remaining 19 climbs (yes, I'm slowly getting there) next year. My recent training seems have been worthwhile and I actually have some vestige of form to develop over the winter months. 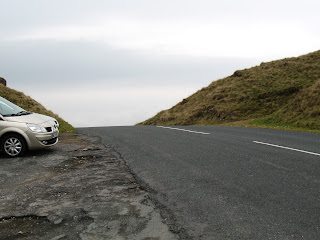 I have the hell of video editing to reacquaint myself with but hopefully in a week or so I should have the videos completed and up on the site. Don't worry, despite me being happy with my riding they will still come complete with their normal sound track of me wheezing as the scenery wobbles past very slowly. Watch this space.
Posted by David at 22:32