My first 100 climbs focussed trip for a couple of years had to have a statement climb in it, you know; one of those climbs that is well known for its fierceness. I wasn't too sure if I would have the legs for it but The Rake in Ramsbottom seemed a safe bet. It has been used in the past as a national hill climb course and is famed for having a very long handrail bolted to the wall that borders the steepest section of road so that knackered walkers have something with which to pull themselves uphill. Hopefully I wouldn't find myself in a position where I need it.

After a rubbish nights sleep in a Travelshack it was only a 15 minute drive to Ramsbottom. The town itself didn't really leave much of an impression apart from seeming very busy, even though it was pretty early on a Saturday morning. It seems a prosperous little town but a bit scruffy. The parking was at least free which is always a welcome bonus. Coming from North Devon where the cost of parking can sometimes be more than the value of your shopping I made doubly sure by asking a confused looking parking warden that the car park I was using was indeed free.

Anyway, once parked up it was time to see if I could still get into the groove and get the bike, the cameras and myself set up and ready to go in a short space of time. I guess I must have some sort of latent muscle memory because within about 5 minutes I was rattling across some cobbles towards the start of the climb with no idea of how I managed to be on the bike and moving forwards.

The Rake is kind of in three parts. The first section takes you up a straight bit of road to the pub which sits on a left hand uphill bend. The pub is a well known spectator spot when the hill is being raced up. This first section is steep but not too difficult. It was a bit hard to get my cold legs turning over but I was pretty pleased with how it went. Once past the pub (thankfully there were no beer drinkers to heckle me at 8am in the morning) the gradient eased off a bit. I wasn't able to coax any more speed out of my legs but it was a chance to catch my breath before the final steepest part of the climb. 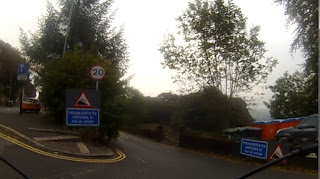 All the best climbs have their own warning signs

I was surprised at how busy the climb was, both in terms of parking and the traffic. Taking on the climb later in the day could have resulted in a few holdups. After a brief bit of spinning on the easier middle section the final turn off up The Rake proper came into view along with a couple of signs displaying the 25% gradient sign and a warning not to tackle the road in snow as you turn right into Rawsons Rake. Adjusting to the gradient took my breath away at first but if I'm being totally honest it didn't feel like a proper 25% slope. I've ridden plenty of them by now and this one didn't seem too bad. I'd like to think I'm fitter and wiser as a cyclist and so better able to cope with the steep stuff but in truth I think the climb is only 25% for a short section past the initial warning signs. Thats not to say it was easy; I managed to winch myself up the final section but only at a slow pace but, I still don't think it is as fearsome a gradient as the signs suggest. I didn't even really notice the hand rail until I was nearing the top and not once did I feel the need to grab hold of it


Once the top of the hill appeared the slope eased very quickly and it all felt like a bit of an anticlimax. It all seemed to be over very quickly. The ride back down was at least fun but I didn't really feel like I had taken on a great adversary and escaped with only a few minor scrapes. It was just a bit steep at the top and then over. Maybe I'm being more critical these days.


After packing the bike away it was off to Sabden to ride the Nick of Pendle which proved to be a more entertaining ride with a bit of random road rage thrown in. More on that to come.
Posted by David at 13:16